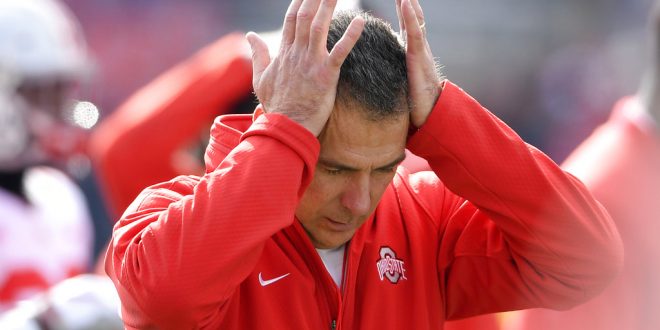 FILE - In this Nov. 17, 2018, file photo, Ohio State head coach Urban Meyer holds his hands to his head before an NCAA football game against Maryland in College Park, Md. Urban Meyer, the highly successful football coach who won three national championships and sparked controversy and criticism this season for his handling of domestic violence allegations against a now-fired assistant, will retire after the Rose Bowl, the Ohio State University announced Tuesday, Dec. 4, 2018. Ohio State didn't immediately say why Meyer was stepping down after seven years at Ohio State and an 82-9 record, but the 54-year-old coach has previously cited health concerns. He has an arachnoid cyst in his brain that causes severe headaches. (AP Photo/Nick Wass, File)

It’s safe to say that Urban Meyer has had a controversial year with the Buckeyes this season. From an investigation into allegations of illegal and illicit behavior by a former assistant, to a racial slur scandal involving a current Gator wide receiver and former Buckeye Trevon Grimes. As well as another former assistant, to admitting having a brain cyst that’s caused massive headaches, the man has gone through it all. Meyer had surgery in 2014 to treat a congenital cyst in his brain, but the headaches have returned at times in recent years.

These incidents have influenced him to ultimately retire from as the head coach for the Ohio State Buckeyes once and for all. He’s coached the team for the past seven seasons, including a national championship season back in 2014. The head coach is 82-9 at Ohio State, with a 7-0 record against Michigan and three Big Ten titles.

Urban Meyer will retire as one of the greats of his era. pic.twitter.com/4sEU8PVn9J

However, Meyer will finish this season off coaching the Buckeyes’ last game against the Washington Huskies on Jan. 1 at the Rose Bowl. On Jan. 2, the head coaching job will immediately belong to offensive coordinator Ryan Day. This will be Meyer’s first time coaching in the Rose Bowl.

Meyer is scheduled to further explain his decision alongside athletic director Gene Smith at 2 P.M ET.

Day has already had a go at the head coaching job earlier this season, when Meyer was suspended for the first three games of the season following his domestic abuse cover up scandal with the team. Day, just joined Meyer’s staff back in 2017.

This isn’t the first time that Meyer will announce his retirement. Back in 2010, he stepped down as head coach of the Florida Gators on a brief stint due to heart issues. A couple months later, he stepped down to spend more time with his family.

Meyer coached his last game for Florida back on Jan. 1, 2011 at Outback Bowl against Penn State in Tampa.

He later accepted a head coaching job at Ohio State just a year afterwards. Who knows? Maybe he’ll come out of retirement once again in the near future.

Several months ago I predicted Urban Meyer would step down at Ohio State this offseason, sit out a year, and then take over at USC. We'll see what happens next now.

Recent grad from the University of Florida. Editing all articles on here while helping out the newbies. Love all things basketball.
@@MarcoJMartinez_
Previous Eagles get big 28-13 win over Redskins
Next Florida Football flips second recruit from Miami in just 2 days