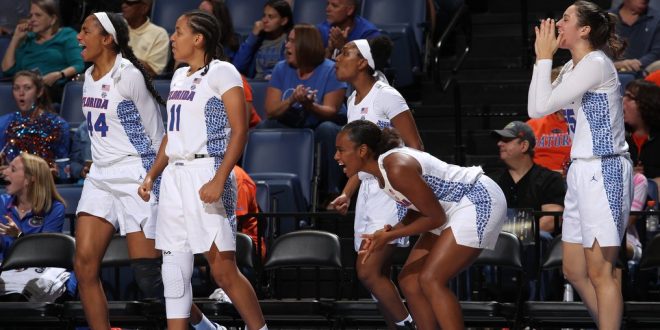 On Thursday, the Gators women’s basketball team opened up SEC play against Alabama. Florida was unable to come out of Tuscaloosa victorious, however, and dropped their tenth game of the season.

After losing 67-74 to the Crimson Tide, UF will be back at the O’Dome on Sunday to take on Auburn. The Tigers come into this weekend’s matchup with a 12-2 record and a 4-1 mark on the road.

The Tigers will present a number of problems for the Gators to handle defensively during their first meeting this season. They are currently averaging 81.1 points per contest and have a scoring margin of plus-17.3 points per game.

Defensively, Florida is giving up just 66.3 points a game and is allowing 41.2 percent of their opponents’ field goal attempts to go down. They are also collecting over 25 defensive rebounds per contest, which is an area to pay attention to when they face Auburn. The Tigers have 30 more total offensive rebounds than the Gators on the season.

Relying on Nakkasoglu and Washington

Head coach Cameron Newbauer has seen a number of his younger players step up in their 2018-2019 campaign. Ariel Johnson, Kiara Smith, and Kristina Moore don’t have the most experience on the team, but the trio has shown potential and have made solid contributions for the team.

In order for the Gators to win, however, they will look to the guidance of Delicia Washington and Funda Nakkasoglu. Both of these players are Florida’s top two leading scorers and produce in a variety of ways.

Nakkasoglu, who is averaging 18.8 points per game, has been lights out from behind the arc all year and is a dangerous spot-up shooter. She is shooting at least 50 percent from both the field and from three-pointers, along with knocking down 90.6 percent of her free throws.

Washington, on the other hand, runs the offense and distributes the ball well to her teammates. The junior guard has also been a force on the backboards, leading the team with 8.5 rebounds per game.

The Gators will look to get other players involved, but Nakkasoglu and Washington will be key factors on Sunday.

After a one-game stint at home, Florida will be back on the road this upcoming Thursday to take on South Carolina. Tip-off between the Gators and the Gamecocks is scheduled for 7 p.m.

Florida is going to be back home again next Sunday to face off against Missouri. That game is scheduled to start at 3 p.m.