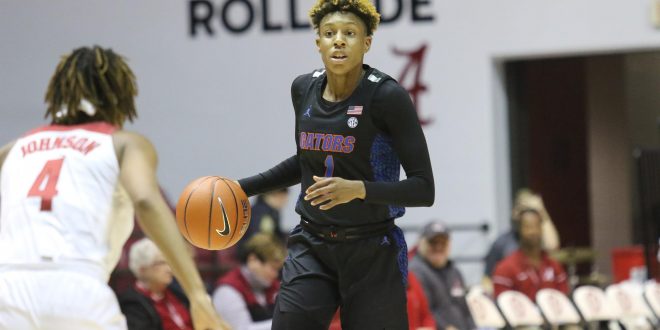 Against Alabama, the Gators women’s basketball team was hoping to turn the tide on their subpar season. Unfortunately for Florida, they weren’t able to come out with a victory in their first SEC game of the season.

On the road against the Crimson Tide on Thursday, the Gators were dominant early and led 25-8 after the first quarter. The rest of the game saw head coach Cameron Newbauer’s group get outscored in each of the following three quarters.

“We got off to a great start,” Newbauer said. “We knew were going to get open looks, and when they went down we had the lead, and then we stopped hitting shots. We just didn’t zone in on defense like we needed to and gave up some untimely miscues.”

Florida’s stellar first period of play was highlighted by an incredible run that lasted about six minutes. The Gators extended their lead to 21-5 after going on a 17-0 run, which began with this three-pointer by Ariel Johnson:

There were five different players that scored for UF during this stretch: Johnson, Delicia Washington, Zada Williams, Paige Robinson, and Danielle Rainey.  In total, eight Gators scored during the first ten minutes of the game. Funda Nakkasoglu, the team’s leading scorer, did not register a point until 2:46 mark in the second quarter.

Gators close the quarter on a 21-3 run. Eight Florida players score in the first quarter paced by Johnson and Williams who have six apiece. pic.twitter.com/qd7A4OV3jw

Although Florida came out the gates strong, they could not keep up the pace offensively for the rest of the game. By halftime, the Crimson Tide cut the deficit to 7 points after going on a 12-3 run to close the second quarter.

While Nakkasoglu and Washington were productive in the second half, Alabama’s firepower was too much to handle. The Gators’ opponent had five players score at least 6 points in the final 20 minutes of game time. 12 of those points came on 57 percent shooting by Jasmine Walker, who is averaging 13.9 points per game.

Florida did out-rebound Alabama 20-18 in the second half, but struggled to knock down shots. The team went 8 for 30 on their field goal attempts, with 7 of them coming from behind the arc. Nakkasoglu chipped in 13 points and 3 three-pointers while Washington had 6 points and 5 rebounds, but it was not enough to keep the Gators from losing their tenth game of the season.

The theme for Florida this season has been their inability to put it all together for a full 40 minutes. Newbauer talked about what led to his team giving up a 20-point lead to the Crimson Tide.

“They’re an SEC-caliber team, so we knew they weren’t going to sit down after they trailed 25-8,” Newbauer said. “If you don’t keep hitting shots, teams like that are going to chip away at it and we just didn’t respond as well as we needed to. This was a great learning experience for us.”

A positive takeaway from the Gators’ loss was that the team knocked down 36.4 percent of their three-pointers on 33 attempts.

“We hit 12 three-pointers and had some other good looks that just didn’t go down,” Newbauer said. “We just have to keep plugging away and fighting.”

Florida (4-10) will be back home at the O’Connell Center on Sunday to take on the Auburn Tigers. The Gators will not play a non-SEC opponent for the rest of the regular season.

Tip-off between Auburn and Florida is scheduled for 1 p.m.