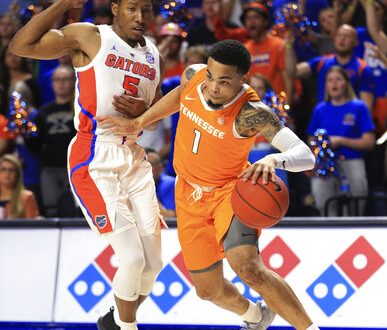 Thoughts on the Gators’ Defense After Loss to Tennessee

A home loss to Tennessee isn’t great, but Florida basketball showed continued signs of promise on the defensive end.

Defense Has Been a Strength All Season

There’s no hiding it: the Gators have had a relatively disappointing season thus far. Some tough losses, however, have somewhat covered up the fact that Florida has had a fantastic season on the defensive end. According to KenPom.com, the Gators rank 5th in the nation in adjusted defensive efficiency. They have held opponents to 60.0 points per game on 39% shooting. While the Gators have played mostly man defense this season, the zone has proven to be a useful and versatile tool for Mike White.

There are both positives and negatives to take away from the 78-67 loss to Tennessee.

Tennessee is too Talented

The talent disparity between the Gators and Volunteers seems pretty clear. Grant Williams and Admiral Schofield were both bigger and better than Florida’s players tonight. Williams had 20 points, 9 rebounds, 4 assists while Schofield had 14 points, 8 boards and 2 assists. The Gators played solid defense against these two, but they both just overpowered Florida.

After the game, Mike White spoke about Tennessee’s big men. “They are grown men in that front court.” White specifically mentioned William’s dominance, saying “If we played man-to-man for 40 minutes, Grant Williams might have had 60. He’s so good.”

Get out of the way, Grant Williams is coming through. pic.twitter.com/82jyOB3QbH

Without the use of the zone defense, this loss would have been much worse. Mike White sent out the 1-3-1 zone throughout the course of the game, and it really forced a lot of issues for Tennessee. The zone sparked quite a few turnovers and allowed the Gators to keep the game within one possession for large portion of the game.

Still, when the Gators reverted to their man-to-man defense, Tennessee’s offense ran smoothly. The zone defense has been a real focus of late, and freshman Noah Locke said after the game that the team has been practicing the zone defense as much as man-to-man.

The Gators defense put on a good performance, but they came up short at the end of the game. Coach White said “Defensively down the stretch, we made too many mistakes.” The Gators have had quite a few late-game collapses where they don’t make enough plays down the stretch. Their defense kept them in the game, but it wasn’t good enough to push them over the edge.

Mike white made it clear that “It’s got to be more important to us. It can’t be a moral victory. We’re the University of Florida.”

#Gators fall at home to the Vols. #Battled pic.twitter.com/6IcCTn7vpJ