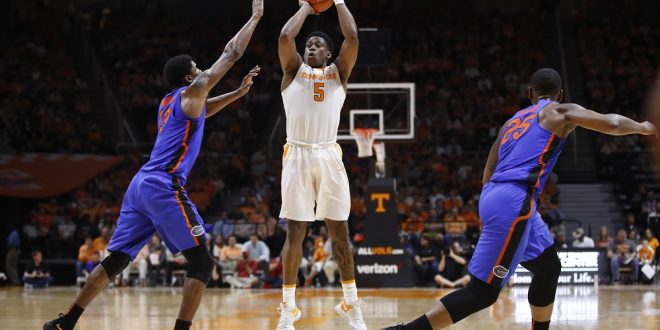 No. 3 Tennessee Defeats Florida in Thriller

The Tennessee Volunteers defeated the Florida Gators by a score of 78-67. KeVaughn Allen led the Gators with 18 points on 6-9 shooting (5-6 from three), while Noah Locke added 16 points with four threes.

Grant Williams dominated for the Volunteers with 20 points, 9 rebounds and 4 assists on 8-11 shooting. Jordan Bowden added 17 points, while Admiral Schofield rounded out the Vols scoring attack with 14 points and 8 rebounds.

The Gators couldn’t have expected a better first half of action. After falling behind 17-11, Mike White’s squad finished the half on a 27-18 run.

They connected on nine three-pointers and held the Volunteers potent offense to 35 points. Even though Tennessee shot an efficient 6-11 (54.5%) from beyond the arc, the Gators extended 2-3 and 1-3-1 zone defenses gave the Volunteers a ton of trouble.

The second half started off well for the Gators, but the Volunteers pulled away when it mattered most. Grant Williams and Admiral Schofield combined to score 18 second half points on 7-9 shooting. Schofield hit a dagger three pointer to give the Vols a five point lead with 44 seconds left.

White was really upset with how his team was out of position at such a critical point in the game.

Ultimately, Williams and Schofield showed why they are considered one of the best duos in all of college basketball.

However, it was the play of junior guard Jordan Bowden who stole the show. He finished with 14 points in the second half and made many big plays to help Tennessee secure the victory. Bowden continues to step up for the Vols, with 17 or more points in three straight games.

The Volunteers capitalized on numerous opportunities. In the second half, they grabbed six offensive rebounds which led to ten second chance points. They also had eight points off of turnovers and 24 points in the paint.

Mike White discussed some critical errors that contributed to the loss.

On top of numerous mental mistakes that White mentioned, the Gators only finished the second half with six second chance points, seven points off of turnovers, six points in the paint, six bench points and zero fast break points.

#Gators fall at home to the Vols. #Battled pic.twitter.com/6IcCTn7vpJ

The Florida Gators will look to move to 2-2 in the SEC as they hit the road to take on the 14th ranked Mississippi State Bulldogs on Tuesday, January 15th at 7:00 p.m.

Previous AFC Divisional Playoff Round: Patriots vs Chargers
Next Thoughts on the Gators’ Defense After Loss to Tennessee