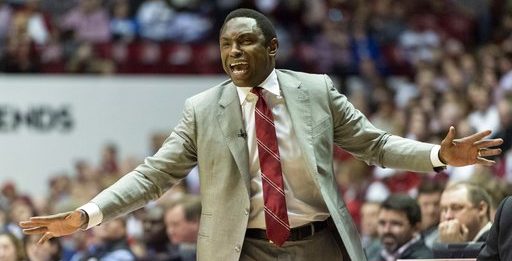 Alabama head coach Avery Johnson yells in to his team during the first half of an NCAA college basketball game against Kentucky, Saturday, Jan. 5, 2019, in Tuscaloosa, Ala. (AP Photo/Vasha Hunt)

Alabama Hopes to Bounce Back Against Missouri

Both Alabama and Missouri suffered different forms of heartbreak heading into Wednesday night’s match up. For Alabama, they were seconds away from picking up a big home win against Texas A&M.

However, Aggies guard T.J. Starks smashed those dreams with a clutch three-pointer at the buzzer to give his team the 81-80 victory. The loss dropped the Tide to 1-2 in SEC play, which is more than what Missouri can say.

The Tigers are just one of two teams, the other being Vanderbilt, who haven’t locked up a conference win yet this year. For Missouri hoops fans, hopefully third time will be the charm for the Tigers when they host Alabama.

The Tide started SEC play with a roaring start, by rolling past then-thirteenth ranked Kentucky 77-75. Since then, the Tide has receded. Alabama has dropped their last two SEC contests, with the last one in devastating fashion. The game was back and forth throughout, but late game struggles on the defensive end proved costly for Alabama.

Alabama head coach Avery Johnson acknowledged the need for his team to close out games.

Alabama’s three-point defense had a strong showing against Texas A&M, limiting the Aggies to a mere 15.8% from deep. The perimeter defense for the Tide will be put to the test against a potent Missouri team, who loves the three ball. You can’t blame them because the Tigers are ranked first in the conference in 3-point field goal percentage with 39.4%. They’re also 16th nationally in the category.

Slowing down this three-point arsenal won’t be an easy task for Alabama. But it starts on the boards. Missouri isn’t just a one-trick team. They are also very stout in rebounding the basketball. The Tigers have out rebounded opponents 11 out of the team’s 14 games.

Johnson said the key for his defense starts inside the arc, where Missouri sets everything up.

Both Alabama and Missouri take the court tonight trying to snap two game losing skids. Tip-off from Columbia is set for 9 p.m.