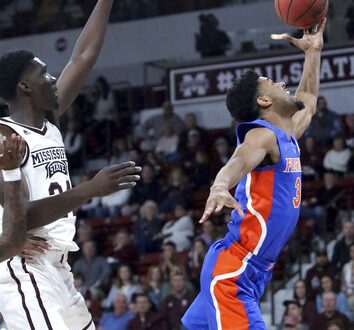 The Gator men’s basketball team has had a very poor season on the offensive end, and it continued in their loss to the Mississippi State Bulldogs.

The Gators have had a difficult time coping with the loss of Chris Chiozza. The only natural ball-handler and true point guard on the roster is freshman Andrew Nembhard. The rest of the guards in the rotation struggle creating opportunities for others. The lack of crisp ball movement forces the team to rely on isolation basketball and settle for inefficient outside shots.

To me, the offense has never been the problem, it's the execution. The Gators have been setting some pretty poor screens this season/making lazy cuts off the ball. It's not enough to just be in the spot to set the screen or to run across the baseline.

The Gators have numerous high quality shooters on their roster including Noah Locke, KeVaughn Allen, Jalen Hudson and Keith Stone. However, Hudson and Stone have struggled mightily, partly because of the fact that the slow nature of the offense doesn’t create a lot of open looks for the team.

Florida ranks 331 out of 353 in pace of play, and is 172nd in the country in three point percentage at 34.4%. The team is averaging over 25 attempts per game from beyond the arc, but are not making enough of those attempts to be relying on three-pointers.

The Gators are shooting free throws at an abysmal rate this season. They are making just 67.4% of their shots from the stripe. For a team that already has offensive struggles, they are hurting themselves even more by leaving free points on the board.

Their offense ranks 281st in the nation in points per game with 69.7. They are averaging almost 12 turnovers and just 13 assists per game. According to KenPom.com, the Gators are 77th in the nation in adjusted offensive efficiency. The lack of an effective offense has cost Florida several wins, and it is a huge reason why the team has had a disappointing season so far.

Better Against Mississippi State, But Not Good Enough

The Gators showed some improvement on offense, but they still were not able to execute down the stretch against the Bulldogs. They had 18 assists, which is their second highest total of the season. They made 8 of 10 free throws, as compared to their 67.4% average.

Still, the shooting percentages weren’t great. They shot 42% from the field and hit 10 of 31 threes. The offense stalled during the closing minutes of the game, leading to another late-game heartbreak. The pressure of being the primary ball-handler impacted Nembhard, who had six turnovers in the loss.

Until the Gators figure out how to run an effective offense, some more tough losses might be in store for Florida.