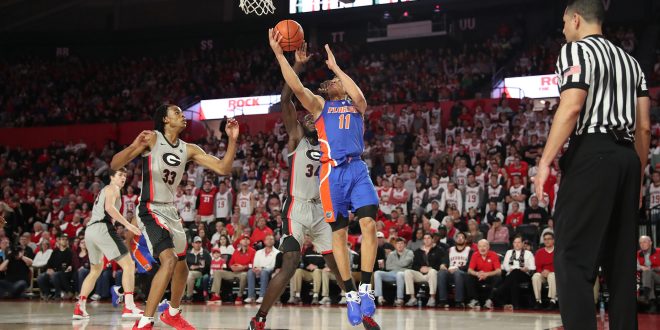 Gators Pull Away Late in Victory Over Georgia

The Florida Gators bounced back from their two game losing streak by defeating the Georgia Bulldogs 62-52. KeVaughn Allen led the Gators with 13 points, while Noah Locke added 10 points. However, it was Kevarrius Hayes who had the biggest impact on the game. The senior center had 7 points and 9 rebounds, 6 of which were offensive boards.

The Gators dominated the Bulldogs on both ends in the first half. They forced 8 first half turnovers and converted that into 12 points. Mike White’s squad shot 7-13 (53.8%) from beyond the arc and limited Nicolas Claxton to no points and 4 turnovers.

The second half was a completely different narrative.

The Gators’ 10-point halftime lead evaporated less than five minutes into the second half. Georgia took a 5-point lead with less than 12 minutes left in regulation, but the Gators finished the game on a 19-4 run to secure the victory.

However, the Gators got over their typical late game inconsistencies and closed the door on the Bulldogs, scoring 12 points in the final six minutes of action.

What Went Right For the Gators?

The Gators continued to dominate on the defensive end. They forced 20 Georgia turnovers and converted that into 28 points. They also limited the Bulldogs to 19 shots in the second half and 43 overall. In contrast, the Gators attempted 56 shots and 27 three-pointers.

Florida forced Georgia into a ton of highly contested attempts late in the shot clock. Defense has been the calling card for Mike White’s group this season, and that aspect continued to shine bright in Athens on Saturday afternoon.

Johnson, who is only 6’5″, used his incredible vertical leaping abilities to grab 7 rebounds. With the unexpected departure of Keith Stone in the second half, both players came up huge down the stretch for the Gators.

KeVaughn Allen continued his dominant play in the SEC. He is averaging 15.2 points per game in conference play. He also has six straight games in double digits, including 10 of his last 11 games. He is finally playing with the confidence that made him so special during his sophomore year.

The Gators will look to move to 3-3 in the SEC as they take on the Texas A&M Aggies on Tuesday, January 22nd at 8:30 p.m. in College Station.