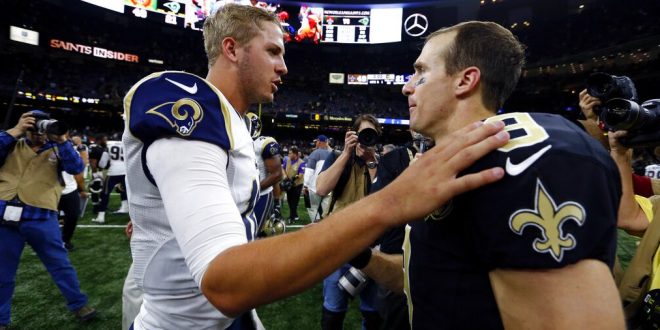 On Sunday, the New Orleans Saints square off against the Los Angeles Rams in the NFC Championship. Both teams finished the regular season at 13-3 and topped their divisions.

In the NFC Divisional Playoff between the LA Rams and Dallas Cowboys, the Rams kept the ball on the ground for the majority of the game. The Cowboys had no way of stopping it.

The Rams ended with 273 rushing yards on 48 attempts, averaging 5.7 yards per carry. C.J. Anderson and Todd Gurley II split the yards between them fairly even, with Anderson picking up 123 yards and Gurley getting 115 yards.

Jared Goff wasn’t utilized as frequently in the game but still accomplished his job. He threw for 186 yards on 15/28 passing and didn’t turn over the ball.

The Saints preferred to keep the ball in the hands of veteran quarterback Drew Brees against the Eagles. Brees threw for 301 yards on 28/38 attempts, with two touchdowns and one interception.

Stat of the Day: The New Orleans Saints defense surrendered just 99 yards on the final eight drives by the Philadelphia Eagles in the Saints’ 20-14 playoff victory. pic.twitter.com/Qa5pMnIy8v

Alvin Kamara and Mark Ingram II added to the Saints attack on the ground, with Kamara getting 71 yards and Ingram picking up 53 yards.

Although his impact against the Cowboys was fairly minimal, Jared Goff is nothing to scoff at.

In fact, Goff put up more passing yards during the regular season than Brees. Goff threw for 4,688 yards while Brees threw for 3,992 yards.

Goff discusses his preparation for the game.

However, Brees has the advantage in most other key areas.

While both quarterbacks threw 32 touchdowns, Goff threw for 12 interceptions and Brees threw only five. Additionally, Brees’ offensive line has protected its quarterback better. Brees was sacked 17 times in the regular season, compared to Goff being sacked 33 times.

One of the biggest assignments for the Saints defense will be to stop the LA rushing duo of Anderson and Gurley. If the Rams can keep pressure off of Goff by establishing a strong running presence, the Saints defense could be in for a long afternoon at home.

Saints coach Sean Payton acknowledges the danger the Rams possess on the run.