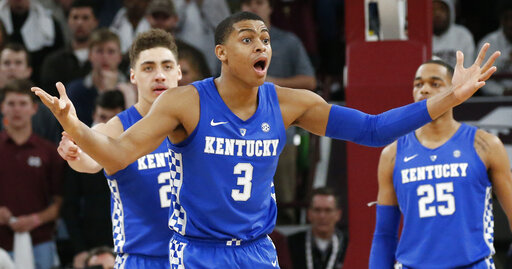 No. 5 Kentucky Prepares for Tough Week in Rupp Arena starting with LSU

The No. 5 Kentucky Wildcats will put their perfect home-game record to the test this week. The Wildcats will host two elite opponents: No. 19 LSU and No. 1  Tennessee.

When you look at the schedule and see our upcoming games. pic.twitter.com/NToJATXDRt

Tuesday’s game will be critical for the Wildcats (20-3, 9-1 SEC) and the Tigers (19-4, 9-1 SEC) as both are fighting to secure the No.2 spot in the SEC. Kentucky’s sole conference loss was in Tuscaloosa where they fell to Alabama 77-75 in their first league game of the season.

Last time out, the Wildcats let their 18-point lead over the Mississippi State Bulldogs diminish to the final moments of the game. But Kentucky’s defense shut out the Bulldogs before the buzzer. PJ Washington had a game scoring 23 points while Keldon Johnson and Tyler Herro contributed 13 and 12 points, respectively.

Meanwhile, the Tigers have won 12 of their last 13 games as they come into this matchup on a two-game winning streak after losing to Arkansas at home (90-89) just 10 days ago. However, LSU is proficient on the road with a 5-1 record.

With the regular season coming to a close, the stakes are undeniably high for both teams.

LSU is No Walk in the Park for Kentucky

Just a season ago, LSU won only 18 games the entire season. Fast forward to mid-February of this season and the Tigers have now won more games than they did last season. With 19 wins so far, LSU is a force to be reckoned with and Kentucky is not underestimating this team despite hosting the first-ranked Vols on Saturday.

“It’s a big week for us. We aren’t trying to look ahead so we need to focus all of our attention on LSU and do everything we can to get that ‘W,”  Herro says.

It’s Reid and Waters’ World, We’re Just Living in it

While LSU is aggressive on both sides of the ball, the team’s biggest threat is Tremont Waters. The sophomore guard averages 15.7 points (eighth in the SEC), 6.1 assists (third in the SEC) and 3.0 steals (leads the SEC). Waters is also aggressive at crashing the boards, rebounding 37.3 percent of LSU’s misses.

In addition to Waters, seven players average at least seven points a game. In fact, the team averages 83.3 points per game compared to Kentucky’s average of 78.7 points per game. But Tigers freshman forward Naz Reid has been a stand out explosive unit for LSU. Reid averaged 20.3 points, 9.7 rebounds and shot 57 percent from the floor in his last three games.

In their last two games, LSU has overturned an eight-point and 16-point deficit from the first half against Mississippi State and Auburn, respectively. Waters and Reid’s outstanding crunch time performances earned them SEC Weekly Honors.

The Wildcats and the Tigers will face off at Rupp Arena on Tuesday, Feb. 12 at 7 p.m. EST on ESPN.

@sophialafrance
Previous SEC Match Up Georgia On The Road, Hosted By The Aggies
Next Mizzou Hoops Host Arkansas in SEC Match UP