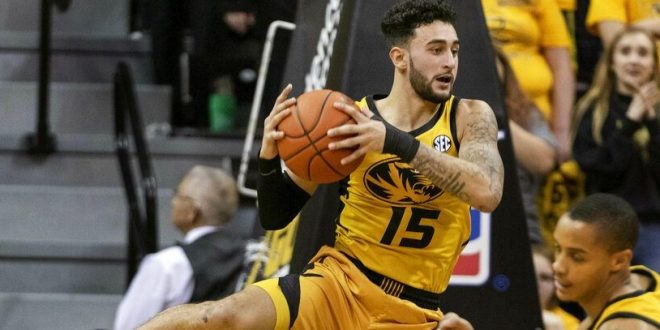 Missouri's Jordan Geist (15) pulls down a rebound during the second half of an NCAA college basketball game against Vanderbilt, Saturday, Feb. 2, 2019, in Columbia, Mo. (AP Photo/L.G. Patterson)

This will be the second time that these two SEC-foes will meet this season.

Their first meeting on Jan. 23 ended in an away 72-60 loss for the Tigers. Needless to say, the Tigers are looking for redemption at home.

Missouri is comparatively better at home, posting a 7-5 record at Mizzou Arena, than they are away, with a poor 1-5 record.

However, Arkansas is almost even 3-4 while away.

Both teams are coming off of an SEC loss. Arkansas dropped a game to South Carolina on Saturday while Missouri fell to Texas A&M.

Tough ending to this one. pic.twitter.com/xx5ch7IDXE

Statistically, the Razorbacks lead the Tigers in every stat but two. In total turnovers, both teams are tied with 314. In turnovers per game, Missouri leads that column with 14.3 compared to Arkansas’ 13.7.

Razorbacks’ forward Daniel Gafford is ranked second in the SEC with rebounds per game (8.7) and No. 5 in blocks per game (1.9). Gafford also leads his team with an average of 16.4 points per game.

However, in the Razorbacks’ last game against South Carolina, Gafford struggled to find the net.  After only scoring a total of 8 points, Arkansas’ head coach Mike Anderson said he expects more from Gafford.

“I don’t think [Gafford] played his best. I don’t think he matched their physicality. When he physicality that took place he got those fouls and it just kind of went from there. His rhythm wasn’t there,” said Anderson.

NBA personnel have to scratch their heads while watching Gafford jostle for position on the block over and over.

Relatively, Mizzou’s guard Jordan Geist leads his team in points per game with 13.6 and has been on a roll, scoring in the double digits in the Tigers’ previous five games.

The last time Geist scored in the single digits was when Mizzou faced Arkansas earlier this season on Jan. 23. He only scored 7.

Yet, in the Tigers’ very next game, an overtime loss against LSU, Geist made some personal records. His first career double-double, season-high 25-points, and career-high 11 rebounds.

Furthermore, both teams are looking for a much-needed comeback win as they both linger in the bottom half of the SEC standings.

Arkansas has the opportunity to bridge the gap between its ranking (No. 8) and the top half of the table, while Mizzou (No.11) can hope to avoid sinking to the bottom.

Tip-off is at 8 PM and the game will be broadcasted on ESPNU.