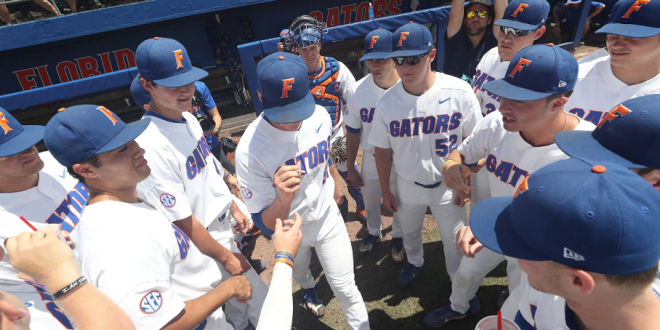 It’s been 364 days since the Florida Gators Baseball team finished the 2018 season with a 49-21 record bowing out to the Arkansas Razorbacks in the College World Series.

With four straight CWS appearances and seven since 2010, the Gators never lack for talent.

Additionally, the 2019 Gators will be looking to reach Omaha and bring home a second College World Series title.

Friday night against Long Beach State, Tyler Dyson and the Gators will begin to pen this new chapter.

Rookies Will Get First on The Corners

Florida opens the season ranked No.3 in the reason USA Today Coaches poll. The high expectations are expected thanks to the strong, proven starting rotation in years past.

Particularly, the freshman on the team will be taking on a bigger role for the Gators and O’Sullivan knows that.

For instance, the departure of India and Liput hurts the field as India lead the team in batting average last season while Liput gave the Gators consistency.

Jud Fabian will likely start in center field whereas Kendrick Calilao will start at first.

Calilao is the first true freshman to start at first base under O’Sullivan on opening night since Ryan Shealy in 1999.

Although the Gators lost some key members of the 2018 season team, there are plenty of holes to be filled.

While O’Sullivan has his starting rotation set with Dyson, Tommy Mace and Jack Leftwich, sophomore Jordan Butler is up in the air on starting roles.

One of the roles for Florida, is for the older players to provide leadership to bring the same momentum the now-departed players brought.

For Brady Smith that meant leaning on what former Gators catcher J.J Schwarz instilled in him.

J.J. Schwarz was the first Captain on a team led by O’Sullivan.

But even so, he decided this season he was going to name senior second baseman Blake Reese and senior outfielder/ DH Nelson Maldonado as captains for the 2019 season.

What We Can Expect?

The season opener is Friday at 6:30 p.m. All three games this weekend will stream live on SEC Network+ via the WatchESPN app.