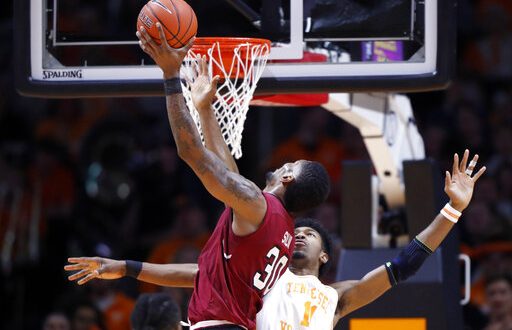 Chris Silva leads the Gamecocks against the Red Hot Rebels

The Gamecocks are now 9-1 when scoring at least 80 points this season after defeating Texas A&M, 84-77, on Saturday. Carolina continues to dominate from the three-point line. Against Texas A&M, the Gamecocks made 16 three-pointers to tie the school record. The team continues to lead the SEC from beyond the arc, averaging 41.8 percent.

On offense, the senior forward averaged 19.5 points, hitting 50 percent from the field, 60 percent from beyond the arc and 90.9 percent from the charity stripe. On defense, he had 12 and nine defensive rebounds against Tennessee and Texas A&M, respectively. In addition, he averaged 2.5 blocks per game.

Meanwhile, the Rebels are red hot as they enter Colonial Life Arena. Ole Miss is ranked 30th in the NET with four Quadrant 1 wins. The Rebs are riding a four-game winning streak, holding their opponents to an average of 63.8 points per game.

The team has been aggressive averaging 11.3 steals per game and 23.5 points off turnovers. In fact, Ole Miss forced 25 turnovers–the most against an SEC team since February 2007 –against Missouri on Saturday.

Breein Tyree has been explosive for the Rebs over the last seven games, averaging 22 points per game. The junior guard is the sole player in the league to rank in the SEC’s top 10 in scoring (18.4 ppg, 2nd), free-throw percentage (48.4 percent, 3rd) and field-goal percentage (48.4 percent, 5th). Tyree and Terence Davis are a dynamic duo averaging a combined 34.8 points per game in conference play––the highest scoring duo in the SEC.

The Gamecocks will host the Rebels on Tuesday, Feb. 19 with tipoff set for 7 p.m. EST.