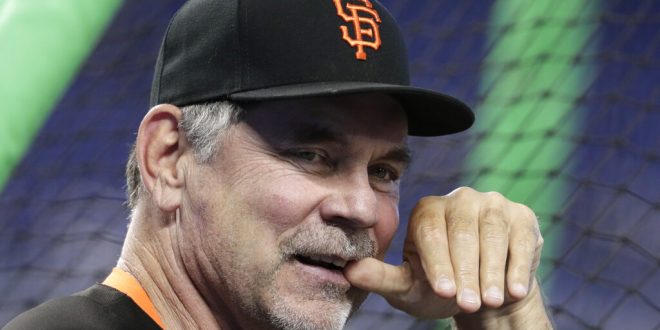 FILE - In this June 12, 2018, file photo, San Francisco Giants manager Bruce Bochy watches batting practice before a baseball game against the Miami Marlins, in Miami. Bochy says he will retire after this season, his 25th as a big league manager. Bochy says he told the team of his decision on Monday, Feb. 18, 2019. (AP Photo/Lynne Sladky, File)

San Francisco Giants manager, Bruce Bochy, announced on Monday, February 18 that his upcoming year would be his last. After 13 seasons as manager for the Giants, Bochy believes the time has come for something new.

“I’ve managed with my gut. I came up here in 2007 on my gut. So it’s a gut feeling it’s time,” Bochy said in a clubhouse interview, “It’s been an unbelievable ride. There’s so much in there to be grateful for, with the players, the city, the fans, my ride here. It’s time. I’ll stay in baseball and do something. … I’m not going too far, trust me. I love this game. It’s been in my blood, so sure I’ll be doing something in another capacity and I look forward to it.”

Bochy took to Twitter to express his appreciation for his time in San Francisco with the Giants.

Ever since I moved to San Francisco in 2007, the city and our awesome fans have embraced me. I'm going to miss it, but I'm so grateful for the last 12 years and am looking forward to finishing strong this season.

Bochy joined the Giants back in 2007 after departing from the San Diego Padres after 12 seasons. During his time as manager, the Giants won the World Series three times in 2010, 2012, and 2014.

The 2010 Championship was the Giants first title since they were the New York Giants in 1954. In his time with the Padres from 1995-2006, he managed the team to four NL West titles and an NL Pennant in 1998. Bochy also played in the majors for nine seasons with the Astros, Mets, and Padres.

The Giants manager revealed his decision to the players before their first full-squad workout of spring training. Giants First Baseman, Brandon Belt said, per MLB.com, that Bochy became emotional during the announcement but didn’t spend too much time dwelling on it.

“I’m just grateful to have his tutelage for ten years now,” said Posey to NBC Sports,” and what a run he’s had. “I know I’ll be inspired to–even more so–to go out there and give it everything I got for him. For the sacrifices, he’s made all these years and giving up his life to so many different players.”

Bochy says he intends to stay involved in baseball after his final season with the Giants.

“I’m not going anywhere. I don’t have any cruises planned, trust me, I don’t plan on going up Mount Everest. Baseball, that’s my life. I’ll be around,” Bochy said. “I don’t have a bucket list. There’s no hidden agenda in all this, trust me.”

Harrison is a sports coordinator at ESPN 98.1 FM/850 AM WRUF. He served as a beat writer for Florida Gators football for the 2019 and 2020 seasons. He also contributes to WRUF's Gainesville Sports Center segments and makes appearances on the Clash on Harp on Sports. Harrison has been a content writer for WRUF since January 2019 as well.
@HarrisonSmaj
Previous Tampa Bay Lightning Sweep Columbus Blue Jackets on the Road, 5-1
Next Chris Silva leads the Gamecocks against the Red Hot Rebels