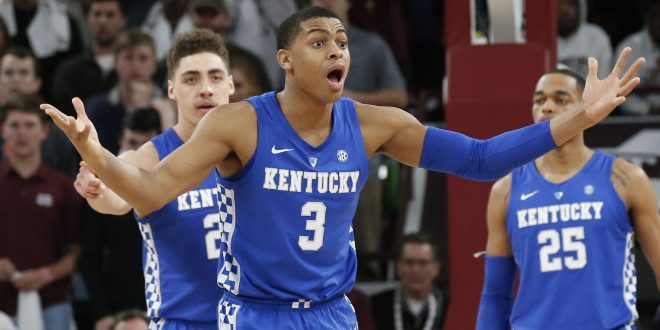 After an 86-69 statement win against the then No.1 Tennessee Vols, the Kentucky Wildcats proved they are a top contender. The W over the Vols allowed the ‘Cats to jump to No.4 in NCAA rankings.

Home in the Arena

While this game may seem like a routine-win for Kentucky, Mizzou may have more to say for themselves while hosting the ‘Cats. The Tigers are 8-5 while at home which is significantly better than their 1-6 away record.

Playing at home seems to have an impact on the Tigers. Last year, Mizzou clinched a convincing 69-60 win against the Wildcats at Mizzou Arena.  Earlier this season, Missouri lost a mere 86-80 game in overtime against the-then No.25 LSU Tigers.

Moreover, Mizzou is 3-3 at home against ranked opponents.

The Wildcats are a well-rounded team. That was evident in their win against Tennessee.

In the SEC, Ashton Hagans is ranked No.2 in steals per game while Washington is ranked 4th for rebounds.

Washington had a lot of good things to say about his team’s collective effort.

“I have a lot of confidence of my guys. We’ve been working every day for this. We dedicate our lives for this.”

PJ Washington’s efforts against Tennessee earned him quite a few bragging rights.

Missouri has a leader of its own. Senior guard Jordan Geist is the name to remember.

Geist ranks high in the SEC scoring 14.2 points per game.

Compared to last season, Geist has already scored over 100 more points than he did last year and there are a handful of games left to be played. After playing 33 games last year, Geist recorded 242 points. This year, at only 24 games played, Geist has been dominating with 341 points.

He’s scored in the double-digits in the past seven consecutive games.

Kentucky has plenty of confidence to take this game back to Lexington with them. Yet, the Tigers may be able to convert more than they concede with the home crowd cheering them on.

Tipoff is at 9 PM and can be watched on ESPN.