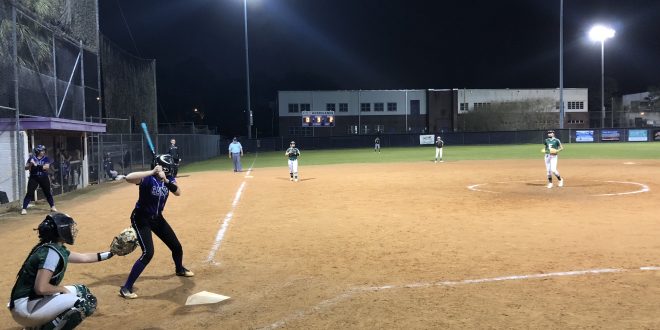 The Gainesville Lady Hurricanes’ softball team won their season opener 9-1 against the Forest High Wildcats at home on Tuesday. Pitcher Alissa Humphrey tossed a no-hitter behind a 16-strikeout performance.

Humphrey started off on the mound for the Hurricanes by striking out the side. Following the switch, Parris Wiggs reached first base after a dropped line drive to second base. Another error on a bunt allowed Gainesville to take the early advantage with runners on second and third base. However, a double play and a pop out to second quickly ended the scoreless first inning.

Humphrey carried her early momentum into the second inning as she struck out the first two batters. The third out was picked up from a soft groundout to shortstop. The Hurricanes’ Natasha Fox opened up the bottom half of the second with a deep left double, followed by Sidney Karas’ own double to advance Fox to third. With runners on the corners, Katherine Gray bunted in the two Gainesville baserunners to give the Hurricanes a 2-0 lead entering the third inning.

The Wildcats managed to get Jaela Haynes on third via an error and two stolen bases, but another two strikeouts by Humphrey left the Wildcats with a second straight scoreless inning. This time up, Humphrey got some action at the plate by hitting a single. A double by Brianna Boggs then advanced Humphrey to third. A line drive single to left field short brought home two more runners to give the Hurricanes a commanding 4-0 lead at the end of the third.

Humphrey extended her hot hand and subsequent no-hitter into the fourth by striking out the side. A double down the left field line by Wiggs followed by a throwing error on a ground-ball to third brought the runner in to extend Gainesville’s lead to 5-0. With a runner on second, Ashton Palmer capped off the fourth inning with a run-scoring single to left field to give the Hurricanes a lead 6-0 with two innings remaining.

Humphrey’s no-hitter continued into the top of the fifth inning following another pair of strikeouts by Humphrey and a pop out to the catcher. The Hurricanes couldn’t find any success in the bottom of the fifth with three batters up and three batters down. The score remained at 6-0 in favor of Gainesville heading into the sixth inning.

In the sixth inning, two more strikeouts and a pop-up to right field preserved Humphrey’s no-hitter. The Hurricanes got on the board again following two hard grounders to third that resulted in a runner coming home. A line drive up the middle brought another runner home to make the score 9-0, Gainesville.

Alissa Humphrey caps off her no hitter with this strikeout as the Gainesville Hurricanes defeat Forest Wildcats 9-1 in their season opener. @ESPNGainesville @GHSSoftball_2 pic.twitter.com/6R72eh3CeC

The final inning started off with the Wildcats’ Kailiegh Skinner managing a triple on a dropped pop-up to right field. However, the play was ruled an error, thus keeping Humphrey’s no-hitter intact. A pitch later, a sacrifice fly drove Skinner home for the Wildcats’ first run of the game. The late run was not enough for Forest as Gainesville won their season opener 9-1 behind Alissa Humphrey’s no-hitter, which according to her after the game was nothing new for her.

Humphrey and the Hurricanes play again on Friday at Santa Fe while the Wildcats face Crystal River at home on the same day.