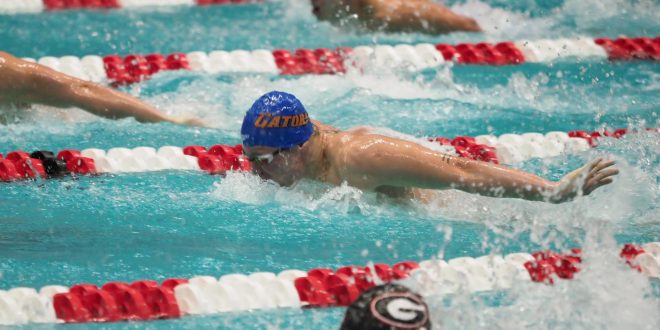 Florida Swimming and Diving Teams Compete in the SEC Championship

The Florida men’s and women’s Swimming and Diving teams are competing in SEC Championship Tournament in Athens, Georgia. The UF men headed into the tournament ranked 6th and the Women are ranked 8th.

The men’s team rounded out day three (Thursday) in first place with 636 points.

In the 400 IM A Final the Gators including, Robert Finke, Kieran Smith, and Grant Sanders, swept the event for the first time since 2013.

In the 400 IM prelims, Grant Sanders and Kieran Smith finished first and second. Sanders had a personal best time of 3:42.17 and Smith was close with a 3:42.32 time.

Florida has six of the swimmers qualify for the 200 free. Including, Khader Baqlah and Trey Freeman qualified for the A Final.

For the Florida divers, Nick Lydon, had a career high points total and was in first with 331.30 points. Alex Farroe finished 23rd with 292.60 total points and Lyle Hayes-Macaluso had 225.90 total points to finish 31st.