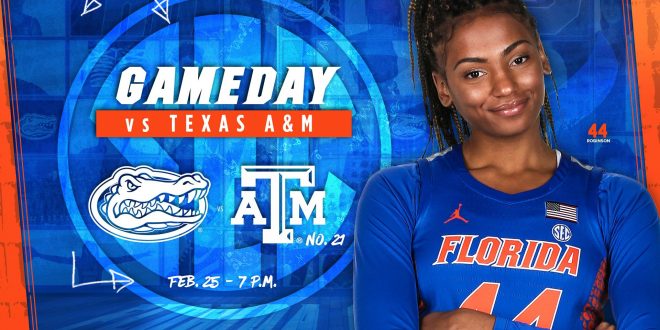 The Florida Gators Women’s basketball team looks to start their week strong as they are set to host No. 21 Texas A&M in an SEC matchup tonight. Tip-off is set for 7 p.m. in the Exactech Arena at the Stephen C. O’Connell Center.

It’s a big week ahead for Florida’s Women’s basketball team as they play in three games this week. Their first matchup of the week starts tonight against the Texas A&M Aggies.

The Gators enter this matchup with a tough loss on the road in Baton Rouge to LSU, 69-51.

Leading the Gators in scoring in their previous matchup was Fundaa Nakkaoglu scoring 11 points. It was her 20th time this season landing in double-figures. Following right behind her was freshman Emanuely De Oliveira, who scored nine points. However, they weren’t enough to grab the win over LSU.

If the Gators are able to knock off the Aggies, this will be the second time they have defeated a ranked Texas A&M while in the top 25 rankings. The last time they defeated them was February 4, 2016.

The last time these two teams met was last season in College Station where the Gators fell short, 85-80.

The Gators end there regular home season this week on Thursday as they host the Georgia Bulldogs.

Texas A&M enters this matchup 9-4 in SEC play and 20-6 overall for the season. The Aggies currently sit ranked 21st in the NCAA Women’s Basketball AP Poll and sit fourth in the SEC . They are coming off an impressive win over Tennessee in their previous battle, 79-62. They look to continue their three game winning streak against the Gators today.

Leading scorer for the Aggies, Chennedy Carter, is averaging 22.4 points per game. She currently leads the SEC conference in scoring. The Aggies have an impressive resume throughout the SEC.  Aggies sophomore N’dea Jones is ranked second in the SEC for rebounds per game averaging 11.2.

After this matchup with the Gators, the Aggies continue on the road and head to Lexington to face No. 16 Kentucky.

Tune in to catch both of these teams battle it out tonight. Live Coverage for the game will be broadcasted on ESPN 98.1 FM 850 AM.