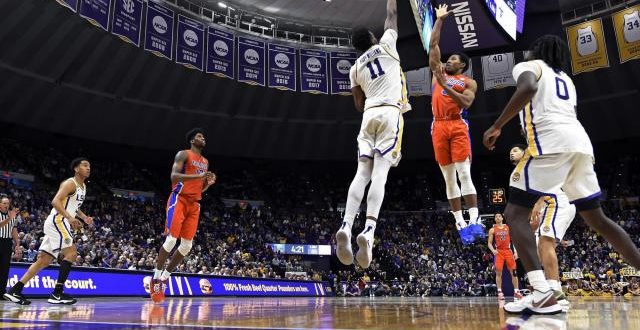 The Florida Gators are looking to move to 10-7 in the SEC as they host the LSU Tigers on Wednesday night. The Gators defeated the Tigers in overtime in Baton Rouge just a few short weeks ago. KeVaughn Allen led the team with 21 points, including 12 points in overtime.

What to Expect From LSU?

The Tigers are now ranked 10th in the country and sit tied atop the SEC at 14-2. They have an offensive efficiency of 117.6, which ranks 13th in the country. This offensive firepower is created by Tremont Waters, who is averaging 15.3 points, 5.8 assists, 2.8 rebounds and a SEC leading 3.0 steals per game.

Along with their elite offensive prowess, the Tigers are a top 50 defensive team. They have two elite defensive guards in Tremont Waters and Skylar Mays and boast a high profile interior defensive presence. LSU steals the ball on 12.8% of their possessions, which ranks 4th in the nation.

This stellar combination of offensive and defensive efficiency has given them the opportunity to win numerous close games against top ranked teams.

The Gators must bounce back from a disappointing home loss to Georgia. Star point guard Andrew Nembhard suffered a back injury during the first half of action. Even though he came back in the second half, it was evident that the injury was hindering his play. The Gators struggled to create uncontested opportunities without the explosive play of their floor general.

Before the loss to Georgia, the Gators’ offense had been thriving. Much of this is because of the improved play of Jalen Hudson, who has produced double digit scoring in 4 straight games and 6 of the last 7. He put up a season high 17 points against Vanderbilt last week.

The two best shooters on the team, KeVaughn Allen and Noah Locke, have struggled mightily over the past few games. Allen, the Gators’ leading scorer, has scored 11 points on 3-19 shooting over the past 2 games.

On a different note, it is senior night for the Gators. They will be honoring KeVaughn Allen, Jalen Hudson, Kevarrius Hayes and Mak Krause.

See you there, #GatorNation. pic.twitter.com/UmT35XhO6j

Previous Funda Nakkasoglu: A contributor on and off the court for the Gators
Next Gators Fall Short Against No. 10 LSU on Senior Night