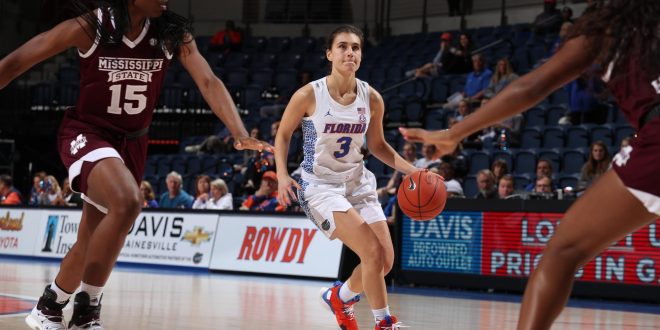 Funda Nakkasoglu: A contributor on and off the court for the Gators

Gator women’s hoops arrives into the SEC Tournament as the 13th seed in the field. Florida kicks off tournament play on Wednesday with a matchup against Ole Miss starting at 11 a.m.

Although the Gators are huge underdogs to make a deep run, they have one of the best shooters in the conference on their roster: Funda Nakkasoglu. The redshirt senior leads her team with 16.7 points per game, but she also makes enormous contributions outside the lines.

According to her teammates, Nakkasoglu has had an incredible impact on and off the court:

When it comes to shooting the basketball, there are few players in the SEC that are as consistent as Nakkasoglu.

Nakkasoglu is sixth in the conference in points per game and is eighth in field goal percentage (46.5 percent). She has scored double-digit points in all but two of the SEC games she’s played in this season.

The native of Hampton, Australia, is also a deadly shooter from behind the arc. Nakkasoglu connected on 80 three-pointers this year, which led the conference, and knocked down 42.6 percent of those attempts.

For Danielle Rainey, having Nakkaosglu gives the Gators a go-to option that helps the team immensely on the court. No matter the circumstance on offense, Rainey knows that she has someone capable of making any shot.

Nakkasoglu, who played at Utah State prior to transferring to Florida, recorded her 2,000th point against Vanderbilt on Sunday. She is just one of 20 active players to have reached that milestone.

Along with being one of the most productive players for the Gators, Nakkasoglu is a leader for her teammates.

Nakkasoglu took younger players under her wing this year and has embraced the mentor role on the team. True freshman Emanuely de Oliveira believes that Nakkasoglu makes everyone “feel more confident,” which is one of her biggest attributes as a leader.

Redshirt junior Zada Williams went in-depth about the type of impact that Nakkasoglu has on the whole team:

“She has honestly been the glue of the team,” Williams said. “She keeps everybody composed… her composure throughout not the best season, different adversities with getting hurt and sitting out, she’s been so positive in trying to keep everybody mentally focused on what’s needed for the next step in our season.”

Williams, who transferred to UF from Miami a couple of years ago, is gearing up for her first SEC Tournament. That same case applies to Rainey (transferred from TCU) and the other freshmen on the team.

Since Nakkasoglu was in this position last year, her belief is that she can help this group with the adjustment process to playing in elimination games.

“Having experience in the SEC Tournament before, I think I can help them out a lot,” Nakkasoglu said. “Especially during the first game. But as we progress throughout the tournament, if we get that opportunity, I just need to keep the team together and keep them focused on every game.”

ESPN 98.1 FM/850 AM WRUF will have radio coverage of Wednesday’s game between the Gators and the Rebels.

Previous Transfer Danielle Rainey’s Impact with the Gators on her First Journey to the SEC Tournament
Next Gators Host No. 10 LSU in Major SEC Battle