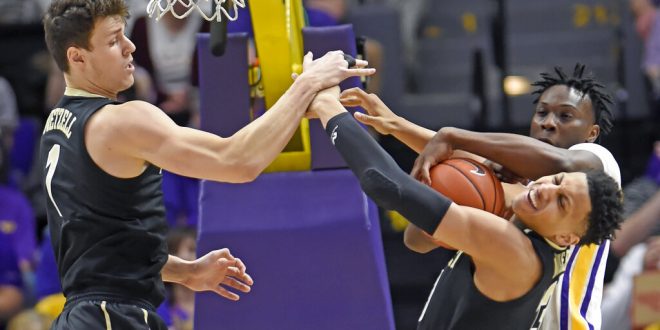 The opening round of the SEC tournament kicks off tonight in Nashville, Tennessee with the Georgia Bulldogs facing the Missouri Tigers at 7 p.m. and the Vanderbilt Commodores taking on the Texas A&M Aggies at 8:30 p.m.

The Commodores and the Aggies are set to face-off tonight in Bridgestone Arena. The game can be found on SEC Network.

Commodores to meet Aggies Wednesday evening in opening round of SEC Tournament.#AnchorDown

Let’s take a look at the matchup:

Vanderbilt is in dead last in the SEC. They haven’t won a single conference game this entire season. On top of their 0-18 conference record, their overall record is 9-22.

Vanderbilt is coming off an 80-59 loss against the LSU Tigers and are on currently on a 19-game losing streak.

Despite no wins in the conference, Commodores men’s basketball head coach Bryce Drew thinks this tournament will be a fresh start that his guys need and hopes it will start a new season for them.

Sophomore Saben Lee leads Vanderbilt in scoring with 12.5 points per game, while freshman Simisola Shittu leads the team in rebounds per game with 6.8.

Coach Drew says that the player’s confidence will be key in tonight’s game. Vanderbilt will need to do what they did against Texas A&M the first time they played them, except they need to rebound the ball better.

Drew also says that the fact the tournament is at Bridgestone makes the guys really excited, especially since they drive past there all the time.

Tonight’s game will be the second time these two teams have met in the postseason tournament. Like the Commodores, the Aggies are coming off an SEC loss against Mississippi State, falling 92-81. Texas A&M is ranked eleventh in the SEC with a conference record of 6-12 and an overall record of 13-17.

While the Aggies have beat Vanderbilt already this season, head coach Billy Kennedy is approaching tonight’s game as a new season and says his team is going to have to do a better job against Vandy.

The Commodores should keep a lookout for Aggies junior guard Wendell Mitchell, who leads the team in scoring with 13.5 points per game. Texas A&M’s junior transfer Josh Nebo also currently leads the SEC in blocks averaging 2.4 per game.

Kennedy said this season was one of his toughest years as a coach due to injuries.

Fortunately for Vanderbilt, Aggies sophomore guard TJ Starks dislocated his should against LSU and will miss the rest of the season. Starks averaged 12.3 points per game and led the team with 94 assists.

These two teams already met this season and it wasn’t too long away. The Commodores and the Aggies met in College Station, Texas on March 2. Since the Commodores haven’t won any conference games, you are right to assume that the Aggies defeated them, 64-57.

Despite their lack of success this season, Vanderbilt leads the series against Texas A&M, 8-4.

Luckily for the Commodores, the tournament is located in their neighborhood so they should feel right at home. At home in Nashville, Vanderbilt leads 5-1, while Texas A&M only leads 3-2 at home.

Sydney is a senior studying telecommunications with a specialization in sports media at the University of Florida. She is a multimedia sports reporter for ESPN 98.1 FM/850 AM WRUF and WUFT-TV.
Previous Delicia Washington Set to Part Ways from Gators Women’s Basketball Team
Next Georgia and Missouri kick off SEC Tournament tonight