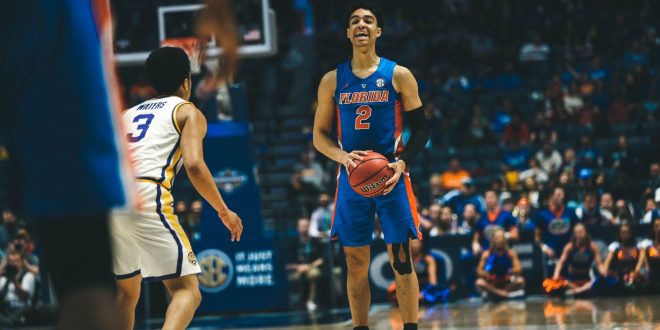 The Gators’ men’s basketball team picked up a huge 76-73 win against the LSU Tigers.

The Gators simply couldn’t get going on offense in the first half, and especially from the perimeter. The team was settling for three-point attempts from the opening tip. The slow shooting start translated to a slow start offensively. Florida only made 2 of their 15 attempts from beyond the arc in the opening period. It wasn’t until the second half that the Gators attacked the basket with regularity and made their game-changing run.

The Gators came into the second half down 35-25, and the Tigers had all the momentum. Florida came out of the break with a lot of energy. They used a 22-11 run over 7:23 run to take a 58-57 lead with about 6 minutes remaining. In the middle of the second half, the Gators hit nine straight field goals. Once they were able to come back and take the lead, it was a whole new game.

Keyontae Johnson had a huge second half and put up another fantastic performance. Johnson had a 12 point second half on perfect 5-5 shooting. He recorded his second straight double-double with 16 points and 10 rebounds. Freshman guard Andrew Nembhard was huge down the stretch. Jalen Hudson and Kevarrius Hayes had great second-half performances as well.

A critical point in the game came came with just under four minutes remaining. Skylar Mays had just converted a crowd-pleasing dunk to put LSU up 63-60. The Gators responded in a huge way on the other end of the floor. Keyontae Johnson hit a three-pointer, and LSU’s Naz Reid was called for a foul away from the shot. Tigers’ interim head coach Tony Benford was called for a technical foul after complaining about the play, so Florida was award two technical free throws and two free throws for the foul. KeVaughn Allen hit two shots from the line and Kevarrius Hayes hit one, giving Florida 66-63 lead in just one offensive possession.

Naz Reid was basically unstoppable in this game. The 6-10 big man went off for 26 points and 14 rebounds. He also hit three shots from deep. However, the Gators did a very good job of limiting LSU’s other leading scorers. Tremont Waters, who is the leading scorer for the Tigers, only scored 9 points on 2-6 shooting. In the two games Florida has defeated LSU, Waters has averaged 9.5 points per game on 27.7% shooting. Skylar Mays was limited to just 6 points on 3-13 shooting.

Freshman point guard Andrew Nembhard had an amazing game for Florida. He was the team’s most consistent offensive performer, in both scoring and creating for others. He recorded 20 points on 7-14 shooting along with 6 assists. Nembhard made countless clutch plays down the stretch. The 6-5 guard went 3-7 from beyond the arc, and he hit the one that mattered the most. The Gators had the ball with 13.5 seconds remaining in a 73-73 deadlock. After several rotational passes, the ball found Nembhard at the top of the key, where he drained a three to give Florida a 76-73 lead with one second remaining.

This was a huge win for Florida’s NCAA Tournament hopes. If they had lost this game, they might now have clinched a birth in the big dance. Now, however, they are essentially a lock to make the tournament. Before the Gators can worry about the big dance, they have to focus on the SEC tournament. The Gators are now in the semifinals, where they will face the winner of South Carolina and Auburn.

Andrew Nembhard just locked up Florida's bid to the NCAA Tournament. Gators now have two wins over LSU. Mike White back to the field of 68.