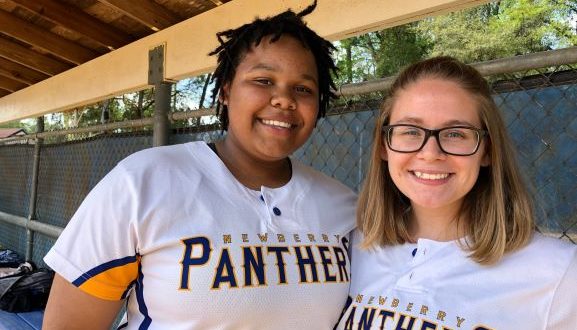 Second-year head coach Chris Schaffer has instilled a new attitude in Newberry’s softball program. Schaffer is the program’s 3rd head coach in the past 4 years. In his first season with the Panthers, they advanced to the second round of their district tournament, something the program hasn’t done in quite some time. This season the team has their eyes on getting even further.

With the dissolve of a JV softball team, Coach Schaffer and the older girls knew that leaders would have to emerge. Senior captain Jana Abrams said that it didn’t take long for girls to “step up to the plate,” no pun intended.

“We’re there for one another and are constantly screaming words of encouragement. I nearly lose my voice every game,” Abrams said.

Abrams described the role of team captain as one of the most important leadership positions that she’s ever held. She’s been playing softball since she was six years old and has always been a little bit on the shy side.

Being a part of the Panther’s team has allowed her to come out of her shell and find her voice. She has emerged as a leader and knows her position as a team captain is important and cherishes each second of it.

Coach Schaffer has taught Newberry Softball that it is about the team, not the individual. Sophomore Jakyria Stanley, explained how just one year on this team has had such a tremendous impact on her.

“I entered high school with somewhat of a poor attitude. I thought it was all about me. I was focused on myself and my goals solely. Coach Schaffer pushed me to my limits and taught me that I needed to invest in others in order to get to where I want to be,” Stanley said.

The love, support, and constant encouragement from players and coaches truly showed  Stanley the bigger picture. It is the team that matters most. It’s not about one; It’s about everyone.

The girls of Newberry Softball are constantly there for each other. “Whether someone makes a good play or an error, we support each other,” Stanley said.

That support doesn’t end when they leave the dugout. According to Stanley, this team is like a family. She has met some of her best friends through the game. They hang out whenever there’s free time. Ironically, Stanley and her friends’ favorite hobby outside of playing for the Panthers still revolves around softball.

They love attending Florida softball games and seeing Tim Walton’s Gators play. This is no surprise. Stanley grew up just a short drive from Gainesville and fell in love with the game because of the Gators.

The understanding and dedication that has been instilled in this program by Coach Schaffer are providing Newberry’s Softball program a foundation for success, on and off the field.

Jakyria Stanley said she’s thankful that she has been able to grow as a person and an athlete in such a short time. Not only does Stanley’s smile show her gratitude, but her stats prove the program has had an impact on her. Both Stanley’s batting average and fielding percentage have increased.

Up Next for the Panthers

Newberry has a home conference game against Palatka at 6:30 pm Friday, March 15, 2019. Next week they’ll be traveling to both Buchholz and Bradford.

Maddie Schmidt's goal is to become a college football reporter. Be sure to check out her sports blog, mygamedaygal.com.
@@maddieschmidt15
Previous The Cleveland Browns: From the Laughing Stock of the NFL to One of its Most-Feared Teams
Next Gators Take Down Tigers in SEC Tournament