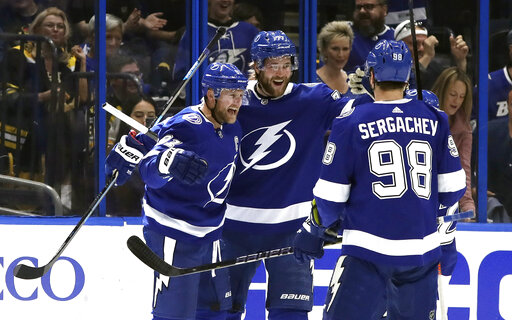 The Tampa Bay Lightning (59-14) have only five games remaining in the regular season. Winning four out of these five would give them the record of most games won in a season at 63. The team to set the record of 62 was the 1995-96 Detroit Red Wings.

The Lightning are already apart of history this season as only the fourth NHL team to win at least 59 games in a season. The 59 game mark came last night from a come-behind, 5-4 win against the Boston Bruins (46-21).

Tampa Bay struck fast with an aggressive offense. This led to Steven Stamkos scoring his 40th goal of the season at 6:42 in the first period. This gave the Lightning a 1-0 lead. This is the fifth time that Stamkos has scored 40 goals on the season and the first since the 2014-2015 season.

This lead would not last long though as Brad Marchand tied the game 1-1 with a goal off a pass from David Pastrnak at 8:30 in the first. However, late in the first period, Stamkos would score his 41st goal of the season to put the Lightning back ahead 2-1.

The game would go downhill for a while for the Lightning starting late in the first. J.T. Miller would get sent to the box for hooking against Danton Heinen. Less than a minute into this penalty, Alex Killorn would also be sent to the box for tripping Patrice Bergeron. The Lightning were able to hold off the Bruins during the Miller penalty but would still have to play the beginning of the second without Killorn.

Although the first period was pretty even, the Bruins took control during the second period. The Bruins would score three uncontested goals in the second period. Charlie Coyle scored his 12th goal of the season at 8:42 to tie the game 2-2. After the goal from Coyle, things went downhill for the Lightning pretty quickly.

At the end of the second, the Lightning had an opportunity to reduce the Bruins’ lead. J.T. Miller fired off a shot just as the buzzer sounded, but the puck never crossed the line. The puck would hit the crossbar, skate right in front of the line and come out of the net.

After a horrible second period, the Lightning would come back to the ice ready to compete for the last period. Victor Hedman would get a quick goal at 5:36 after Stamkos could not get the puck in the back of the net.

The real comeback would not come until later in the third though. Andrei Vasilevskiy made a save at the net and sent the puck in the opposite direction where Stamkos would pick it up. Stamkos would send the puck forward to Nikita Kucherov who wasted no time getting the puck in the back of the net making the game tied 4-4.

The Lightning, however, did not secure the win until the clock was at less than one minute. At 19:07, Anthony Cirelli would score his 18th goal of the season to put the Lightning up 5-4, with less than a minute to play.

Unfortunately for the Bruins, Marchand would get sent to the penalty box for the final seconds of the game for knocking the stick out of Erik Cernak’s hands.

The Lightning are now gearing up for their last home game of the regular season on Saturday against the Washington Capitals (44-24) at 7 p.m.