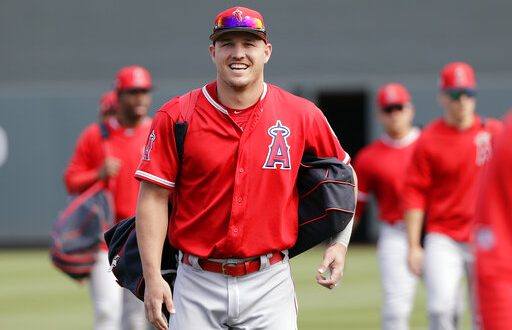 Los Angeles Angels' Mike Trout smiles as he walks onto the field with teammates before a spring training baseball game against the Arizona Diamondbacks Thursday, March 21, 2019, in Scottsdale, Ariz. (AP Photo/Elaine Thompson)

Seven-time All Star and two-time American League MVP Mike Trout seems pretty content with his long-time commitment to the Angels.

27-year-old Trout signed a 12-year, $430 million contract on March 20 with the Los Angeles Angels. The contract set the record for the largest sports contract in history. His contract has him committed to the Angels through 2030. He’ll make $33.25 million in the first two years of his contract, before making $36 million annually in the following ten years.

But what factored into Trout’s major decision?

Trout’s loyalty never seemed to stray away from the Angels. Despite living back in the east coast during off-season, Trout felt at home on West Coast. In his first press conference after locking down the deal, he addressed the rumors circulating around his free agency.

“A lot of talk about going back east and back to Philly … but, I enjoy every minute being here, this is my home,” Trout said. “I love it. A lot of things went into it. I think the direction of the franchise, that was big for me. I think if it was going the other way, I would have considered going, but it never crossed my mind … I was going to be an Angel for life.”

Trout leads the league in on-base plus slugging percentage at .990, while his career batting average is .307. To date, he’s put together 240 home runs, 189 stolen bases and 64.3 wins above replacement.

Acquiring Trout isn’t a complete financial burden on the Angels. Though it adds $11.4 million to the Angels’ luxury tax payroll, the Angels have a pretty significant cushion. They’ll remain $24 million under the threshold, offering them the flexibility to acquire a new piece during the season.

The Angels open up the regular season in Oakland against the Athletics on Thursday, March 28, with the first pitch set for 4:07 p.m. Pacific standard time.