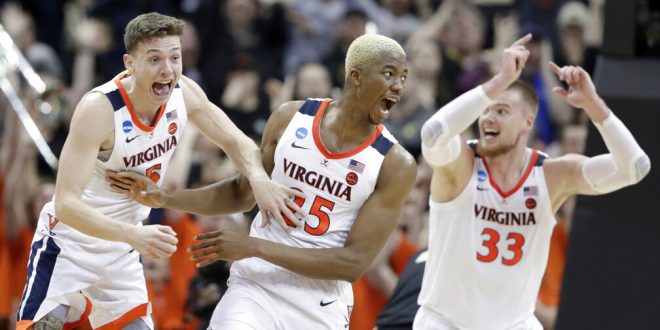 If before the tournament, people knew there would be only one No. 1 seed in this year’s Final Four, most people’s money would’ve been on Zion Williamson and Duke.

And yes, the same Virginia who had not been to a men’s Final Four in 35 years.

Bennett finally got his squad over the hump, winning an instant classic against Purdue in the Elite Eight 80-75 in overtime.

“No one has faced pressure like these guys have or this program after losing in that first round game,” Bennett said. “No one’s done that in the history of the game, so they didn’t know how to do that. So to be in that setting against Gardner-Webb, and then to just kind of muster up enough resiliency and come through it, all those things I think prepared us for this moment. To not lose sight and stay composed, and if we got beat, we got beat, but we were not going to lose this one.”

Out of the gate, it looked like a dangerous journey for UVA.

They fell behind by double digits to (16) Gardner-Webb in their opening game, bringing everyone flashbacks of last year’s upset by UMBC. But as Bennett said, the Hoos battled back to win comfortably 71-56.

From there, they beat Oklahoma by double digits, before surviving a close, defensive game with Oregon in the Sweet 16 53-49. That set up their showdown against (3) Purdue, who was coming off an overtime thriller over (2) Tennessee.

Virginia overcame a heroic effort from the Boilermakers’ star guard, Carsen Edwards, who dropped 42 points and went 10-of-19 from three-point range.

The back and forth game seemed like it would end with Purdue cutting down the nets until Virginia’s Mamadi Diakite buzzer beater, one of the plays of the tournament, tied it at 70 to send the game to overtime.

From there, UVA’s signature defense stepped up, holding Purdue to just five points in the extra period and booking the Hoos’ tickets to Minneapolis.

Virginia will face (5) Auburn in the early game on Saturday at 6:09.

Bruce Pearl’s team is red hot, defeating blue bloods Kansas, North Carolina, and Kentucky in their last three games to get to the school’s first ever Final Four.

It’ll be a battle of strength vs. strength as Virginia’s elite defense will aim to slow down Auburn’s three-point shooting that helped them win the SEC Tournament and blow by Kansas and North Carolina.

If they can do it, they’ll be one game away from a first national title coming back to Charlottesville.