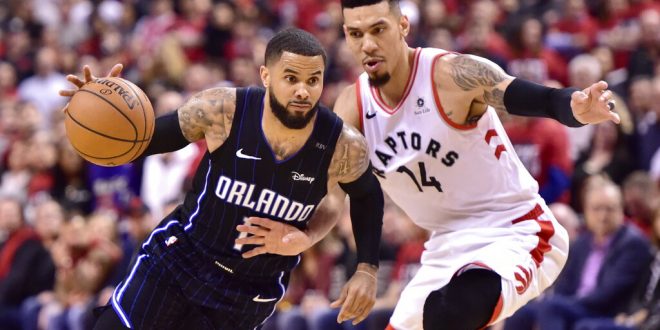 Orlando Magic Confident Ahead of Game 3 Clash with Raptors

The Magic are set to take on the Toronto Raptors in Game 3 of the first round of the NBA playoffs. The series is moving to Orlando for the first time, and the game will tip off at 7 p.m.

Despite coming off of a big loss in Game 2, losing 111-82, the players remain confident. Magic big man Nikola Vucevic talked about how Coach Clifford’s message has impacted the team:

Vucevic is not only a key voice in the locker room; he is also a key player on the court.

During the regular season, the Orlando center averaged the most points (20.8), rebounds (12) and steals (1) per game.

In the first two games of the playoffs, however, Vucevic has struggled from the field. He’s averaging 8.5 points per game and has a field-goal percentage of 28.6 percent. In addition, his rebounding average is down to seven boards per game.

With Vucevic struggling, Orlando has looked to other sources to generate offense. One such source has been point guard D.J. Augustin.

In 26.5 minutes per game, Augustin averages the most points per game for the Magic with 17. Additionally, he leads the team in assists per game with five.

Aaron Gordon has also helped pick up the slack from the struggling Vucevic. He’s averaging 15 points, seven rebounds and 2.5 assists per game, shooting 50 percent from the field.

The biggest threat against Orlando so far this series has been Kawhi Leonard. The former San Diego State man, who went just one pick ahead of Vucevic in the first round of the 2011 draft, is averaging 31 points per game on 62.5 percent shooting.

Pascal Siakam has also been on a tear, averaging 21.5 points and 9.5 rebounds per game.

Game 3 between the Orlando Magic and Toronto Raptors will tip off at 7 p.m. on ESPN.

The @OrlandoMagic don't back down.