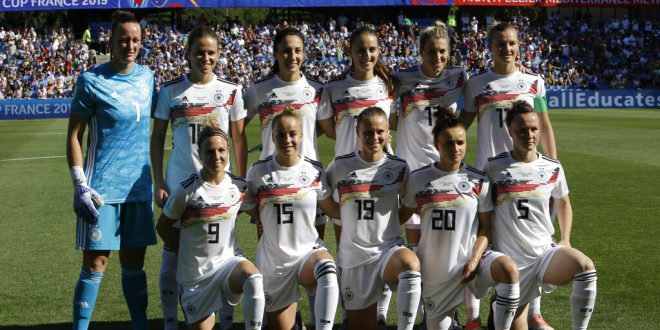 Germany team players pose prior to the start of the Women's World Cup Group B soccer match between South Africa and Germany at the Stade de la Mosson in Montpellier, France, Monday, June 17, 2019. (AP Photo/Claude Paris)

Germany lived up to expectation gaining all nine possible points in Group B, while Nigeria made it out of its group as a wildcard. Granted that, Germany and Nigeria will feature in the FIFA Women’s World Cup’s first knock-out round game.

The National Eleven and the Super Falcons have different tales to tell about how each ended up in the round-of-16.

The Germans came into this tournament in good form and with an announcement to all.

Germany defeated China 1-0 in the first game of Group B.

China took Germany’s punches like Mohammed Ali. Thus, China just sat back with two strikers up top who made German defenders, specifically Sara Doorsoun. At times, China looked like it would win by countering.

Luckily for Germany, Gwinn scored a screamer in the 66th minute to seal the win. But key player, Dzsenifer Marozsan suffered an injury that will keep her out of the following two matches.

The Spaniards dominated but shot themselves in the foot by giving away a cheap goal allowing Germany to take the three points.

Spain dominated possession but couldn’t get past the German backline. In short, Germany was present in the attack. The National Eleven amounted to nine shots and six on target despite having less possession.

In a moment of confusion, Spain’s captain, Marta Torrejon, took too long to clear a rebound and Sara Dabritz easily threw her body and pushed the ball in.

Germany Scraped by with another 1-0 win.

Germany needed goals coming into its third and final game of Group B against World Cup debutants, South Africa.

Germany’s aerial game demolished the African side. In detail, Germany scored its first, third and fourth goal by headers. Captain Alexandra Popp finally got her name in the scoresheet by scoring the third.

Like France, Germany loves to hold possession and open spaces in the wings for wide players to cross the ball into dangerous areas.

Nigeria went from not playing a single national match in the year 2017 to winning the Africa Women Cup of Nations in 2018.

The African champions were stunned by Norway in the first half of match-week one. By minute 37, the Super Falcons were trailing by three goals caused by a combination of lack and concentration and poor positioning.

Nevertheless, Asisat Oshoala showed her true colors as Nigeria’s most talented player on the field with a couple of solo plays. One of the plays being a mazy run almost ending in goal.

Game two was by far the most important game for both Nigeria and South Korea.

Both teams looked to be going after a wildcard spot to get to the round-of-16 after each losing its opening game. South Korea couldn’t handle Nigeria’s pace going forward. Nigeria’s captain, Desire Oparanozie, forced Kim Doyeon to score an early own goal giving the African side leverage.

Asisat Oshoala finished the game with one of the best goals of the tournament. This 2-0 win was instrumental for Nigeria’s qualification to the final rounds.

Nigeria suffered a tough 1-0 defeat against France in the last Group A match.

Nigeria fought for a tie and it was just 10 minutes shy from it. Wendie Renard was allowed to retake a missed penalty after goalkeeper, Chiamaka Nnadozie, stepped off her line. Renard scored the second attempt. Left-back, Ngozi Ebere won’t be available against Germany following a red card.

As a result, Nigeria finished third in Group A with only a -2 goal differential making it out of group stages for the first time since 1999.

Figuring out a plan to make it big in the soccer scene in the U.S. or anywhere else in the world. For now, I'm having a blast writing for ESPN Gainesville and learning a lot from managers and students around the workplace. I'm covering the TV beat for Gators Soccer. What a team! Follow me on twitter: @J_AguerrevereUF
@@J_AguerrevereUF
Previous Yankees Sweep the Rays
Next Germany shuts out Nigeria, through to Quarter-finals 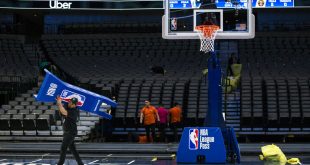