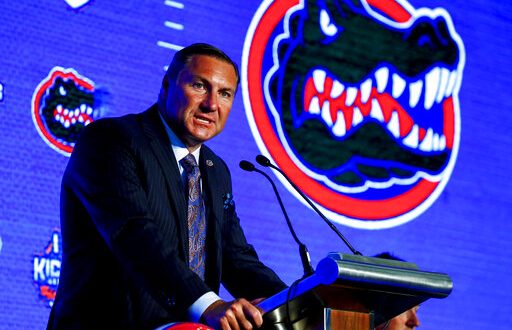 Florida Gators head football coach Dan Mullen isn’t satisfied with just meeting expectations. In fact, he’s striving to exceed them. After achieving a six win turnaround in his first year at the helm, Mullen and the Gators have lofty aspirations going into this season.

The Gators shocked many last season, which ended in a rout of Michigan in the Chick-fil-A Peach Bowl. Heading into Year 2 under Mullen, the expectations for the Gators are to continue on this trajectory of success. The goal for this team is to challenge Georgia for the SEC East and possibly be in the discussion for the College Football Playoff. In his opening remarks at SEC Media Days in Hoover, Alabama on Monday, Mullen talked about the big step forward he wants to see from his team in 2019.

“We had a lot of success last year, but our consistency of performance is something I want to see us change,” Mullen said.

For Mullen, he likes to set the bar high for his team. “I don’t think there’s anyone out there that has higher expectations for this team and the program as a whole than I do.”

Mullen believes the second year will be easier for everyone, crediting a familiarity factor. He wants his players welcome the lofty expectations set for them and the team in 2019.

One of, if not the biggest, catalyst for Florida’s success in 2018 was the improvement of quarterback Feleipe Franks. He finished the year throwing for 2,457 yards and 24 touchdowns. Franks capped off the year with an Offensive MVP performance in the Chick-fil-A Peach Bowl.

Mullen credited Franks for utilizing all of his talents to turn his game around. “When he bought into using all of his skill set to play and not trying to limit himself or not trying to worry, really, about what everybody else thought, he was going to be a better player and he did that,” Mullen said. He finished the year with the most yards and touchdowns thrown by a Florida quarterback since Heisman winner Tim Tebow.

One thing Franks and Tebow have in common is that they are dual sport athletes. As Tebow continues to work his way up to the majors in the Mets minor league system, Franks baseball career might be down the road. Earlier this week, Franks signed a $40,000 contract with the Boston Red Sox.

Mullen, who is a Boston Red Sox fan, is excited for his starting quarterback.

Franks is still eligible to play quarterback for the Gators.

This season could be determined on the winner of Florida’s rivalry matchup against the Georgia Bulldogs in Jacksonville on Nov. 2. As in most years, the winner will be in the driver’s seat for the SEC East division crown. With this the case this year, there has been a lot of trash talking throughout the offseason between the two teams and fan bases.

One comment that drew some debate between the two sides came from Georgia head coach Kirby Smart. At the SEC Spring Meetings in Destin, Smart said on SEC Network that he’d be interested in moving the annual matchup with Florida away from Jacksonville into making it an alternating campus game.

Mullen sees both sides to the discussion.

Florida will renew a dormant rivalry to start the 2019 season when they face the Miami Hurricanes in Orlando. The Aug. 24 showdown will be the first meeting between the two since 2013. This matchup will kick-off the college football season and the sport’s 150 year anniversary.

Mullen talks about the importance of this unique season opener.