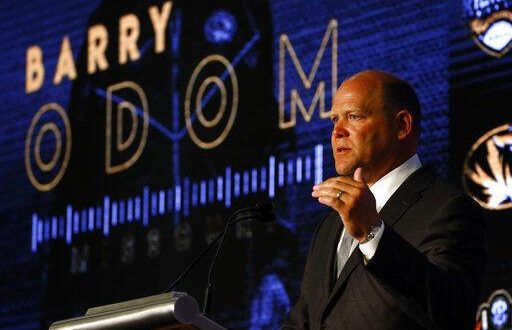 With the 2019 season just over a month out, it’s now the peak of talking season. Over in Hoover, Alabama, SEC Media Days are in full swing. On Monday afternoon, Missouri head coach Barry Odom gave insight to what his offseason looked like.

The argument can be made that Barry Odom’s Mizzou squad saw all but a decline in talent this offseason. The Tigers welcomed a number of transfers this offseason. Former Clemson quarterback Kelly Bryant highlights that list of transfers; he will take over the starting quarterback position first round NFL Draft choice Drew Locke left vacant.

While at Clemson, Bryant led the Tigers to the 2017 College Football Playoff where they lost to eventual national champion Alabama. Bryant’s career at Clemson ultimately ended in 2018 when freshman Trevor Lawrence was named the starting quarterback and back in  December, Bryant made the announcement that he would transfer to Missouri to play out his final year of eligibility.

Getting a new quarterback to gel into a program is never easy. However, Barry Odom feels that Bryant’s transition to Missouri couldn’t have been smoother.

The Year of the Transfer — Thoughts on the transfer portal

If you feel like college football has slipped into another dimension, it’s probably because you, like everyone else, has been sucked into the transfer portal and all its drama.

In addition to Bryant, Missouri was also able to add former Arkansas receiver Jonathan Nance via the portal. Odom gave his thoughts on the portal with a response most coaches could agree with.

The elephant in the room — Odom touches on the postseason ban

Back in January, the Missouri football team was handed a postseason bowl ban for the 2019 season. The penalty was enforced due to a school tutor allegedly giving unauthorized aid to football players. Missouri will appear in front of the NCAA Infractions Appeals Committee later this week. With the average appeals decision taking four to six weeks, the Tigers may be waiting until September to learn their fate. Missouri athletic director Jim Sterk argues the case that Missouri did away with the tutor and reported the issue immediately after learning of the issue. Even though the appeals process may take some time, Odom isn’t letting it blur his team’s vision.

Each year it seems as though Missouri musters up surprising wins that shock opponents; just ask the fans in Gainesville who witnessed a thumping from the Tigers against their Gators last season. Odom’s clear mentality paired with his newly acquired talent could finally give Missouri the pieces they have been missing. However, the NCAA’s decision could derail what could be a promising season.

Ainslie is a journalism major at the University of Florida where she specializes in Sports Media. Her main passion is college football as it was a huge part of her childhood. Ainslie serves as a current correspondent for the Ocala Star-Banner, a newspaper for the Ocala, Florida area. She currently covers Marion County high school sports.
Previous Mullen Talks Exceeding Year 2 Expectations at SEC Media Days
Next Ed Orgeron Confident About LSU’s Offense at SEC Media Day