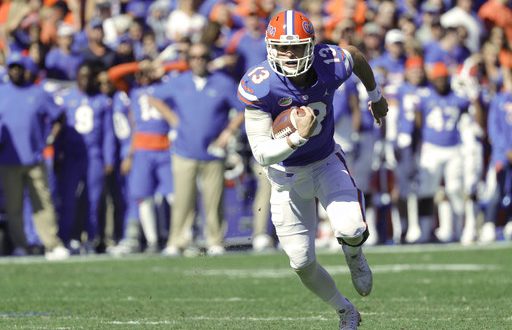 Florida quarterback Feleipe Franks runs for a touchdown against Idaho during the first half of an NCAA college football game, Saturday, Nov. 17, 2018, in Gainesville, Fla. (AP Photo/John Raoux)

With practices for the 2019 Florida Gator football season in full swing, close attention is being paid to the leaders on the field. In the second season under head coach Dan Mullen, the Gator quarterbacks are ready to thrive.

Quarterback coach Brian Johnson explains that successful quarterbacks need to have the ability to clearly communicate to the rest of the team, while also staying true to their personality. He continues on by saying that all three Florida quarterbacks have differing leadership personalities.

Last year, quarterback Felipe Franks took a major step forward. In the 2018 season alone, he scored 24 touchdowns and only had six interceptions. His impressive season allowed Gators to be ranked No. 8 in the preseason Coaches Poll and received an Offensive MVP honor at the Chick-fil-a Peach Bowl.

Franks explains that Dan Mullen has helped him tremendously with his leadership skills on the field. He is striving to be a leader that younger guys on the team can look up to.

Kyle Trask made an appearance in four games last season as the back up quarterback, after a foot injury took him out for the rest of the season. He scored one touchdown for the Gators and completed 63.6 percent for 162 yards.

Trask believes his team has matured and grown since last fall.

Emory Jones appeared in four games at the backup quarterback as well. His accomplishments in the 2018 season was his completion of 75 percent of his passes. He threw for 125 yards and two touchdowns.

Jones says he feels more prepared than he was last year to run offense and he owes that to Mullen.

Entering the second year of this offense, the Florida quarterbacks are ready to continue developing and thrive on the field.

The Gators will wrap up fall camp next week then start game preparation for their 2019 season opener. The first game of the season is Aug. 24 against the Miami Hurricanes in Orlando.