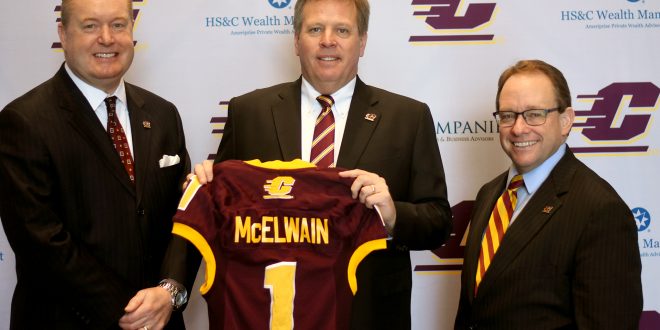 After a season serving as Michigan’s wide receiver coach,  former Gator fo0tball coach Jim McElwain is beginning his tenure back as the head coach at Central Michigan.

McElwain’s new chapter begins on Thursday night as the Chippewas face Albany; Central Michigan is coming off a season in which they won just one game all season.

Got to Score Some Points

A big reason for their 1-11 record was their futile offense.  The Chippewas could only muster up 225 yards per game. They scored only 15 points per game while also being dead last in first downs.

The offense is certainly looking for a spark as Central Michigan had neither a 500-yard rusher or 1,000-yard passer. Looking to change that, McElwain has brought in Houston quarterback transfer Quinten Dormandy and Virginia Tech running back transfer Khalil Pimpleton. Helping McElwain with Dormandy will be former Florida Gator quarterback Austin Appleby. McElwain and Appleby reunited this summer and Appleby is now a coach on the staff.

Lean On The Defense

While McElwain attempts to turn around the offense, he will be leaning on a defense that is much better than the 1-11 record suggests.

Central Michigan actually ranked second in the Mid-American Conference in defense, allowing 355 yards and 27 points per game. It’s not all good news as the Chippewas are actually replacing three impactful players on the defensive side of the football. Both Sean Bunty-Murphy and Xavier Crawford are now playing in the NFL. They will also be replacing Mike Danna who transferred to Michigan.

Central Michigan has a real chance at starting the season 1-0 in 2019 as they welcome Albany to Kelly/Shorts Stadium.

This is a huge opportunity for the Chippewas as the Great Danes only went 3-8 last season. If Albany finds a way to win this game it spells bad news for Central Michigan’s start of the season as they face the Wisconsin Badgers next week.

You can catch all of the action between Central Michigan-Albany Thursday night at 7 p.m. on ESPN 3.