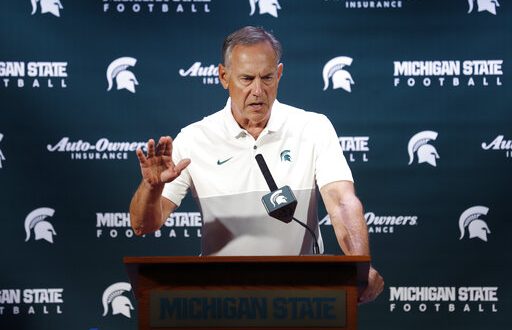 After an excruciating offseason, week 0 of college football has come and gone. Although, things will start to get interesting as Week 1 kicks off this weekend.

One team, in particular, to keep an eye out for is the nationally-ranked Michigan State Spartans. They’ll open the season ranked No.18 on the NCAA AP poll, coming off a 7-6 season capped by a 7-6 loss to Oregon in the Redbox Bowl.

Michigan State head coach Mark Dantonio is feeling confident about the team’s season opener this Friday. The Spartans will face the Tulsa Golden Hurricane on home turf in Spartan Stadium at 7 pm.

Dantonio says he’s more than happy with the shape of this team following camp.

Following the brutal weeks of camp, Dantonio says it’s important to let the team take some time off. He says the game is more than a physical challenge; it has a lot to do with headspace.

This will be the first game for the team’s shuffled and revamped offensive staff.

These low offensive stats, along with public discontent, prompted Dantonio to make some changes to the offensive coaching staff.

One of those changes included the promotion of Brad Salem from quarterbacks coach to offensive coordinator. The Spartans are adamant that some reorganizing, rather than outsourcing, will prove to be what the offense needed.

It will be interesting to see how this shuffle plays out.

Many are wondering how MSU quarterback Brian Lewerke will bounce back after a disappointing and injury-ridden 2018 season. Lewerke is back in the game and seemingly healthy, although there are some notable players missing from this week’s depth chart.

Redshirt senior left tackle Cole Chewins is currently hampered with a back injury and will sit out of this Friday’s season opener. In his place, redshirt junior AJ Arcuri will start. This will be Arcuri’s first career start.

A Message from Dantonio

Despite many uncertainties MSU is facing this season, Dantonio has an important message for his team.