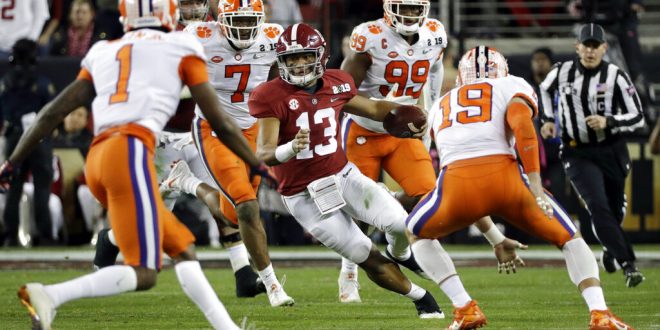 FILE - In this Jan. 7, 2019, file photo, Alabama's Tua Tagovailoa scrambles during the first half of the NCAA college football playoff championship game against Clemson in Santa Clara, Calif. Tagovailoa has been studying men from the Bible, like Joseph, Moses and David. The Alabama quarterback can draw from their successes and failures and the fact that they each had some of both. Now, Tagovailoa has, too, after an almost too-good-to-be-true start to his college career. (AP Photo/David J. Phillip, File)

Crimson Tide quarterback Tua Tagovailoa has the preservation of history on his hands.

With seventeen straight home opener wins under Alabama’s belt, an eighteenth is on the horizon this Saturday against Duke.

Even with the Tide as the major favorite, there are still plenty of questions surrounding the team. With suspensions and injuries abound, what sort of adjustments will be seen from Alabama?

Breaking: Alabama LB Dylan Moses suffered a knee injury during practice on Tuesday that will likely cause him to miss the entire season, sources told ESPN. https://t.co/NAvxKdaerM pic.twitter.com/vtdB9qWQUJ

Meanwhile, Alabama’s offense is encountering some issues of its own. Running backs Najee Harris and Brian Robinson both face suspension after reports cited that they also missed a team function. Wide receiver DeVonta Smith is also facing suspension.

But one of the biggest offensive losses entering the season? Trey Sanders ruled out for the season with a foot injury. Sanders would have backed Harris as the nation’s top incoming running back in the 2019 recruiting class. Entering Duke, Alabama will hand its carries off to younger talent on the roster, including redshirt freshman Jerome Ford, true freshman Keilan Robinson and redshirt sophomore Chadarius Townsend.

Can the Blue Devils respond?

Even with Alabama’s starters in limbo on both sides of the ball, Duke has a major adjustment to make in filling the void left by quarterback Daniel Jones. Fifth-year quarterback Quentin Harris has been named the man for the job, who led the Blue Devils 2-0 as a starter last season. But a battle against Tagovailoa, who last year set multiple single-season records at Alabama, may be daunting.

Duke’s defense isn’t looking too promising, having lost three of its top four tacklers last year. Even with a likely competent defensive line, it’s difficult to say if they can contain Alabama’s offense, even on its “worst” day.

In any case, the season opener will reveal plenty about both teams in various respects. For Alabama, it’s the reliability of its second and third strings. For the Blue Devils, it’s a test all around.