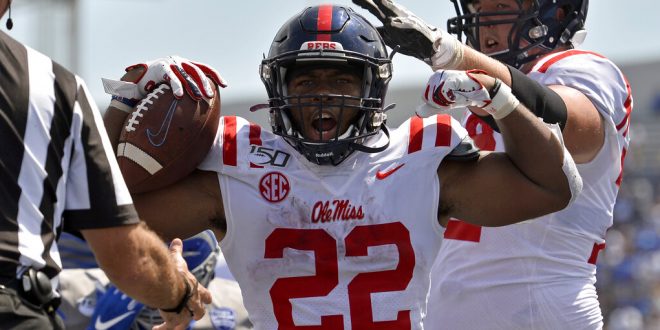 Mississippi running back Scottie Phillips (22) reacts after scoring a touchdown in the second half of an NCAA college football game against Memphis, Saturday, Aug. 31, 2019, in Memphis, Tenn. (AP Photo/Brandon Dill)

Saturday night gives an opportunity for one team to avenge a loss, one to keep the momentum going and for both to show significant improvement.

The Ole Miss Rebels play host to the Arkansas Razorbacks at 6:30 p.m. CT on Saturday.

Both teams are itching to show improvement after Week 1. Ole Miss suffered a loss on the road to Memphis and Arkansas had a close 20-13 win over Portland State.

Arkansas Head Coach Chad Morris said losing rush lanes hurt the Razorbacks more than anything against the Vikings. For him, even one missed tackle is unacceptable.

Morris on areas to improvement:

“There’s always the biggest improvement from Week 1 to Week 2,” Luke said. “But the greatest teach is getting out there and doing it and the experience.”

Mississippi quarterback Matt Corral should improve on his Week 1 performance. He finished 9-for-19 with 93 yards and interception, but Luke said there will be growing pains when breaking in a new quarterback.

Overall, the Rebs put up only 10 points on 173 yards of offense and went 1-for-10 on third down while possessing the ball for just 21 minutes on offense.

A History of Wild Ones

Fans remember the record seven overtime game in 2001, but this rivalry has produced close shootouts for the last four years. Those last four matchups have a combined 10 points separating the winning and losing teams:

The last contest in Oxford saw the Razorbacks overcome a 21-7 first-quarter deficit and win on a last-second field goal to claim victory.

Luke on what he sees from Arkansas:

Morris doesn’t know what to expect in terms of whether the team will be more of a defensive struggle or a shootout but knows his team will have its hands full going on the road in the SEC and trying to win.

“We’re going to get some things that we haven’t seen that they didn’t show at Memphis,” Morris said. “That just comes with playing games early in the year.”