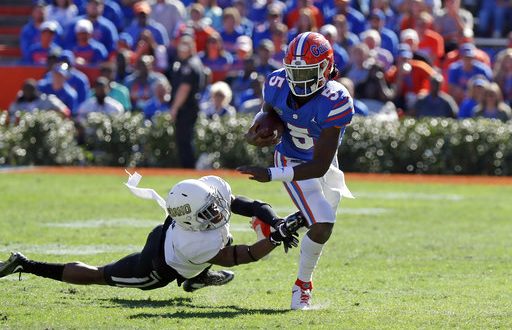 Florida quarterback Emory Jones, right, scrambles from the pocket as he tries to get past Idaho defensive back Tyrese Dedmon, left, during the first half of an NCAA college football game, Saturday, Nov. 17, 2018, in Gainesville, Fla. (AP Photo/John Raoux)

Freshman Gators Who Could Get a Shot Against UT Martin

Florida’s home opener against the University of Tennessee at Martin may not be the most glamorous. However, scheduling an FCS opponent does a few things for the Gators.

First, the team gets a chance to make a splash in the college football world by running up the score. Texas moved from 10th to 9th in the AP Poll after beating Louisiana Tech 45-14. LSU QB Joe Burrow received SEC Offensive Player of the Week honors after topping Georgia Southern 55-3. A strong performance from the Gators can boost the national opinion of the team after their ugly win over Miami. (Florida’s ranking dropped from 8th to 11th.)

Second, these “cupcake” games also allow for younger players to show off their skills before transitioning into full-time SEC starters; Simply put, the empty calories serve a purpose. Last season, Gators redshirt sophomore linebacker Ventrell Miller took an 82-yard interception to the house against Idaho. This season, he broke out against the Hurricanes by leading Florida in sacks (2).

Giving baby Gators a chance to get their feet wet before transitioning to full-time SEC starters is important. Here are some players who could take the field against UT Martin.

Based on the depth chart, Feleipe Franks will get the start against the Skyhawks. But, look for a chance for the Gators’ redshirt freshman quarterback to get reps under center, as well.

The dual-threat player has an undeniable set of wheels. However, open practices revealed Jones still relies on his legs instead of making a throw and the nerves worsen when he’s under pressure. But, with Franks likely leaving for the NFL after this season, Jones will likely slide in as the starter next season.

While he probably won’t be rolled out for significant minutes against a team like LSU, UT Martin gives him the perfect opportunity to play big boy football without getting rushed into a position he’s not ready for.

Copeland is more than a year removed from being the Gators’ highest-rated signee in the 2018 class. Unfortunately, injuries kept the redshirt freshman off the field during his true freshman season.

Florida also has six upperclassmen at wide receiver, including four seniors. Copeland is listed as a solid 2 under WR1, Van Jefferson. However, an opponent like UT Martin could be the game where Copeland breaks out.

A respectable game could translate into more playing time outside of special teams and it’s likely Copeland knows that. Look for explosive plays from the young receiver.

The Gators have three injury-free cornerbacks not named Marco Wilson or CJ Henderson. All three are true freshmen. If Wilson and Henderson leave for the NFL after this season, Florida will need to rely on young players to lock down the sides of the field. Because of this, expect *all* of them to see the field on Saturday.

Top 50 signee Kaiir Elam and four-star Jaydon Hill got minutes against Miami. Neither one really made noise, though. This weekend, it is more likely that one or both players will make an impact as the future of the position.

Chester Kimbrough is recognized as a shifty player with silky footwork. However, the 172-pounder will likely need to bulk up a bit before solidifying his role. But, the staff could put him in against UT Martin and retain a redshirt, if that is the route he is heading.

True freshmen Mohamoud Diabate and Khris Bogle were the only other true freshmen to see the field against Miami. Because of this, the two are likely to see it again against UT Martin.

Both players are primed to be the future at BUCK (LB/DL hybrid), which has duties currently being handled by grad transfer Jonathan Greenard and redshirt junior Jeremiah Moon. Part of the reason young players get a shot against lower-level teams is to gauge their abilities at their future positions. Letting Greenard and Moon rest after a high score from the home team allows Diabate and Bogle to do just that.

Tyron Hopper, Florida’s highest-rated LB signee, should get reps too. Look for at least one of these three players to make an impact.

Lucas Krull and Kyle Pitts leading the tight end pack likely means neither one will play a full game to err on the side of caution against injuries.

Enter Zipperer. The tight end was one of Florida’s biggest “gets” in the 2019 class. The Lakeland High School product is one of the three other members of the tight end group, which also features Kemore Gamble and Dante Lang.

Gamble, a redshirt sophomore, will likely get most of the non-starter snaps. But, look for the former top 105 prospect to make some plays of his own against the Seahawks.