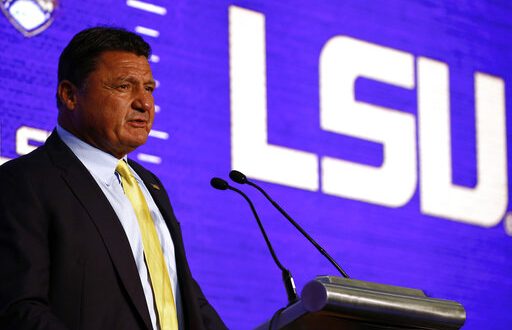 The LSU Tigers will face Mountain West opponent Utah State this Saturday, Oct. 5 in Baton Rouge. This will be the Tigers final non-conference matchup of the season.

The Tigers are currently 4-0 and ranked fifth in the nation. They are coming off a bye week after beating the Vanderbilt Commodores 66-38.

LSU and Senior quarterback Joe Burrow are off to an incredible start. During the Vanderbilt game, Burrow broke LSU’s school-record for most touchdown passes in a game with six. He surpassed Zach Mettenberger’s 2013 record of five passes in a game. The Tigers’ offense has caught the attention of many. Burrow has 1,520 total yards and 17 touchdowns so far this season. He already has more touchdowns than his entire 2018 season, and it has only been four games. Currently, Burrow has a 93.4 quarterback rating.

Head Coach Ed Orgeron is not surprised with Burrow’s productivity on the field thus far. Orgeron emphasized the fact that when Burrow transferred from Ohio State two seasons ago both sides knew what they were getting.

The Aggies will enter Saturday’s matchup at 3-1. They began their season with a three point loss against ACC opponent Wake Forest.

Although LSU is a 28 point favorite Saturday, Utah State’s offense is expected to make the Tigers’ defense work. Utah State runs an extremely fast paced spread offense and has averaged 533 total yards per game.  Junior quarterback Jordan Love leads the Aggies’ offense. He is underrated and has thrown for over 6,000 yards in his career.

“Love is one of the top quarterbacks in the country,” said Orgeron.

Maddie Schmidt's goal is to become a college football reporter. Be sure to check out her sports blog, mygamedaygal.com.
@@maddieschmidt15
Previous A Look at the Gators Offensive Line Ahead of Auburn
Next Ole Miss Takes On Vanderbilt