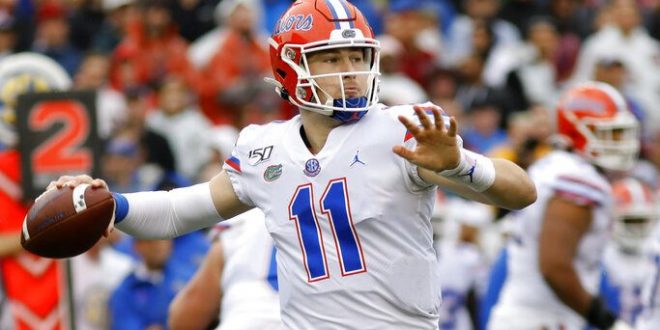 Trask spoke to the media on Wednesday about his success in relief of quarterback Feleipe Franks and what the team expects from next Saturday’s top-10 faceoff.

Top-10 Matchup is Anything But for Trask

Georgia will present its own challenges against Florida next weekend, especially in the form of its vaunted run game.

Trask is treating the Bulldogs like any other team, however. He’s preparing the same way he has for each game this season.

“Coach (Dan) Mullen is going to put together a great game plan,” he said. “Other than that, I’m treating (Georgia) like it’s any other game.”

The redshirt junior’s performance this season backs up that statement.

He is averaging 245 yards in his five starts this year and has tacked on 16 total touchdowns (14 passing and two rushing) with just four interceptions in seven games played.

Trask also emphasized the importance of the Gators’ bye week.

The incumbent believes it’s one of the only times of the season teams can get back to the basics of football.

“During the season, you don’t get a lot of time to necessarily focus on yourself,” he said. “A big thing about bye weeks is us just making sure our techniques are very sound and making sure we’re doing all of the basic things right.”

Time to get back to the basics also means time to recover from injuries.

Coach Mullen said all Gators players should be good to go against Georgia next Saturday, including wide receiver Kadarius Toney.

Trask said he’s excited to have Toney back on offense for the game that will most likely decide the winner of the SEC East.

“He’s a dangerous weapon,” he said. “We’ve missed him and his playmaking abilities…He’s very explosive; he’s a playmaker.”

Toney has been out the past six games with a shoulder injury he suffered against UT Martin.

"We expect all 3 of those guys (Greenard, Zuniga, Kadarius Toney) to be back for the Georgia game"

The Gators will take their yearly trip to Jacksonville to play Georgia on Nov. 2. The top-10 matchup will be a key deciding factor in SEC East seeding.