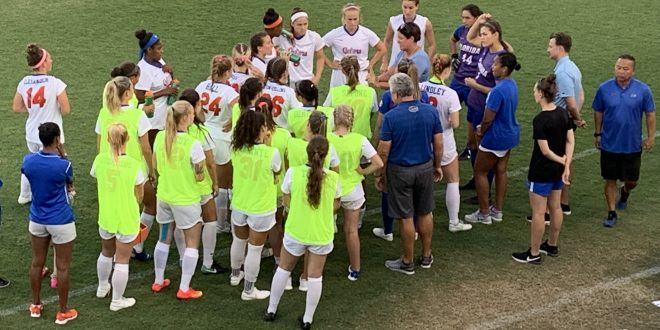 The No. 20 Florida Gators fell to the Tennessee Volunteers 1-0 in Knoxville Thursday evening. Forward Kit Loferski saw red in the 81st minute for dissent.

As a result, the Gators now sit in third in the Southeastern Conference standings. They trail Arkansas (7-1-0) and South Carolina (6-0-2).

Head coach Becky Burleigh put out the following starting 11 to face the Volunteers:

The only change in starters from the Auburn game was Ava Kuyken coming in for Tess Sapone. Sapone didn’t feature in the match at all, likely due to illness.

The first half from Regal Soccer Stadium ended scoreless. Florida and Tennessee had four shots each, but Susi Espinoza and Lindsey Romig were up to the task. Espinoza picked up two saves and Romig one.

The second half was a different story. Florida’s attack began to flow, but it was Tennessee who broke the deadlock after just over 50 minutes.

The Gators attempted to play it out of the back after a throw-in deep in their own territory, but MA Vignola pounced and intercepted. She then dribbled past Sammie Betters and squared it to Katie Cousins who put away her chance with a first-time effort.

Florida continued to attack following the goal. However, they lost Loferski with around nine minutes left in regulation. She picked up a red card for dissent after being fouled just outside of the Volunteer 18-yard box. Referee Corey Rockwell took very little time to show the card after Loferski’s reaction.

Despite the dismissal, the Gators generated two more shots in the closing minutes, but it didn’t matter. Tennessee kept the clean sheet and earned all three points at home.

Romig matched Florida’s attacking prowess with a brilliant game in goal. She finished the game with seven saves and earned her third consecutive clean sheet.

Espinoza finished with two saves, both of which came in the first half.

Burleigh took some positives away form the Gators’ performance, despite missing out on three points.

“It was a really great effort by us – I have no complaints about our effort. Execution at times around the box could have been a little better, but I certainly can’t fault our effort.”

In addition, she says that Loferski apologized to the officials and team following her removal from the game.

Next up, the Florida Gators return to Donald R. Dizney Stadium to face the South Carolina Gamecocks. USC currently sits in second in the SEC. With a win, the Gators can overtake them, and depending on Arkansas’s result, the Gators could regain a joint-first position in the conference.

The match against USC is set to begin at 3 p.m. on Sunday. In addition, Sunday’s match is Senior Day for seven Gator players.

After that, the Gators will finish regular-season play on the road at Georgia. That one is scheduled for Halloween at 7:15 p.m.