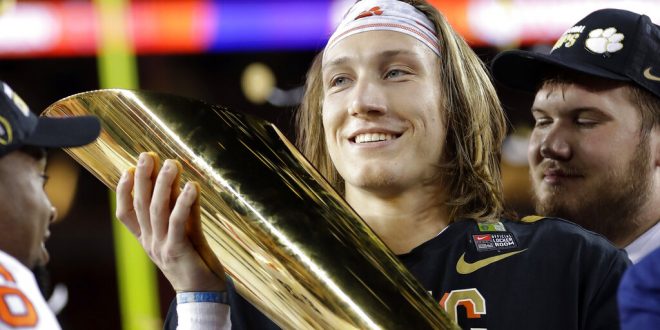 FILE - In this Jan. 7, 2019, file photo, Clemson's Trevor Lawrence holds the trophy after the NCAA college football playoff championship game against Alabama in Santa Clara, Calif. The 13-member College Football Playoff selection committee gathered at a resort hotel in Grapevine, Texas, Sunday, Nov. 3, 2019, to hammer out its first top 25 of the season. It will be revealed Tuesday night. (AP Photo/David J. Phillip, File)

For the first time since the beginning of the College Football Playoff era, Clemson has been knocked out of the top four in the first week. Despite being 9-0 on the season, the defending national champions were still placed at number five. This is behind Ohio State, LSU, Alabama and Penn State in that order.

Many expected the Tigers to be an automatic in for the top four with their defending national champion status; however could their strength of schedule be holding them back this year?

For the 2019 season, Clemson only came in with the 41st hardest schedule. The four teams ranked above Clemson were all ranked in the top 20, and three of the four were in the eight hardest schedules.

Clemson has only faced off against one AP ranked opponent this season and it is unlikely that their three opponents left on the season will move into the rankings. This, along with the Tigers almost losing to an unranked North Carolina team earlier in the season, could be a reason the playoff committee is holding them out from a top four spot.

Despite not having the toughest schedule, head coach Dabo Swinney knows his team has what it takes to make it back to the top four.

The Tigers can trying to go 10-0 on the season with a win this weekend at N.C. State. In their game last year against N.C. State, the Tigers pummeled the Wolfpack 41-7. With a win against them on Saturday, Clemson will extend their longest active streak among FBS teams to 25 games.

Should Clemson pull out the win, they will also have 10 or more wins on the season for a school-record ninth consecutive season. N.C. State has been struggling, losing two straight and three of its last four. Going into the match-up, the Wolfpack are heavy underdogs with Clemson winning the last seven meetings and 14 of the last 15.

Clemson will be led by sophomore quarterback Trevor Lawrence and junior running back Travis Etienne, who has two 200-yard rushing performances games this season.

N.C. State has had trouble finding a leader for their team, but seems to be sticking with red-shirt freshman quarterback Devin Leary.

Despite most likely finishing the season undefeated, is Clemson already an automatic in for the top four?

At least two of the top four teams now will suffer at least one loss. LSU has to face off at Alabama and Penn State will have to face off at Ohio State. Clemson’s remaining games only include N.C. State, Wake Forest and South Carolina.

This has the ability to push one of the now top four out and push Clemson in should everything go as planned for the Tigers.

However, the loss will be considered a “good loss” for whichever top four team does lose as long as they do not get blown out. Time will only truly tell if Clemson will make it into the top four of the College Football Playoff.

Previous No. 3 Alabama vs. No. 2 LSU Preview
Next Oak Hall hosts district rival Saint Francis in Rematch of Week 6 Matchup