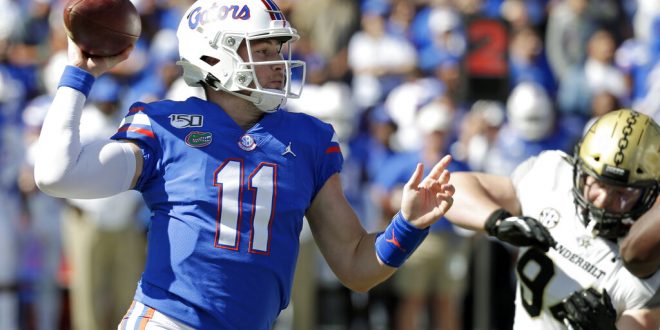 Florida quarterback Kyle Trask (11) throws a pass as he is pressured by Vanderbilt defensive lineman Rutger Reitmaier, right, during the first half of an NCAA college football game, Saturday, Nov. 9, 2019, in Gainesville, Fla. (AP Photo/John Raoux)

This being the fourth time the Gators face a tiger this season (2-1 versus the mascot thus far), historically these Tigers have proven a tough test.

Missouri has won the last two games against the Gators and hold an edge in the all-time series of 5-3 (Florida and Mizzou started playing each other yearly starting in 2012.)

Here is what the Gators need to do to stay hot on a frigid Mid-western afternoon.

Get the Trask Train Rolling Early

It took a good half for quarterback Kyle Trask and the Florida offense to settle in last Saturday. That is not something you would typically say in a 56-0 win, but it’s the truth.

Florida drove all over the Vanderbilt defense, but still finished with only 14 points by half time.

A good mix of missed calls and bad reads lead to two interceptions from the Gators quarterback.

But, boy did the second half bring an offensive explosion.

Trask exploded for over 300 yards passing and two touchdowns.

A key to fighting off the first-half issues would be to limit bad throws and to keep Trask on his feet.

A simple eye test for both of these teams would be a common opponent they both have faced, Vanderbilt.

As stated earlier, Florida blew the doors off the ‘Dores, with a scoreline of 56-0.

Mizzou lost 21-14, which started the current three game losing streak that they now are dealing with.

Vanderbilt’s only other win this year was versus Northern Illinois.

There are other factors. Florida was at home. Mizzou was on the road. Vandy wasn’t on it’s third string quarterback yet.

The silver lining to Mizzou’s unfortunate stretch could be the return of quarterback Kelly Bryant just in time for the Gators.

Bryant was no question the most exciting thing about Mizzou’s season, up until his injury.

The last two games without Bryant (injured midway through the Kentucky game) have both been losses for the Tigers with no offense whatsoever.

Bryant still poses a dangerous weapon to anyone facing the Tigers, as long as he is healthy.

Bryant will face an aggressive Florida defense, coming off of one of their best showings of the season and their second shutout.

Florida shut out Vandy and held them to 128 total yards.

They also forced four turnovers, with some unlikely Gators staring.

One of those young Gators was Mohamoud Diabate, who finished with three sacks and a beautiful strip that lead to Florida’s first defensive TD of the season.

The Gators also had 6 sacks in that game. A stark contrast from the effort put in in Jacksonville just a week prior.

Florida will need this defense to show up on the road, where they have not necessarily been at their best.

Gators outside the Swamp

Florida’s two loses of the season have both come away from the friendly confines of the Swamp.

In Baton Rouge, the Gators were beat continuously on third down and LSU ran the ball down the Gators throats, something no one had done up to that point.

In Jacksonville, Jake Fromm continued to play the role of Gator Killer and went 3-0 against Florida using Georgia unheralded play makers to their fullest potential.

For the Gators to win on Saturday, Florida must be themselves on defense. Mean. Physical. And willing to make plays on their side of the ball.

Florida will kick-off against Mizzou at noon on Saturday on CBS. Radio broadcast will be available on ESPN 98.1 FM 850 AM WRUF.