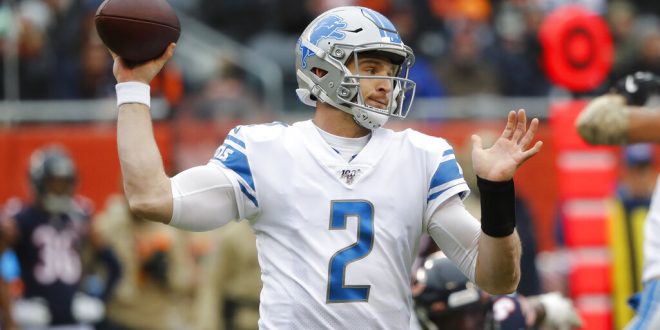 Jeff Driskel has seen the highs of the quarterback position and plenty of the lows as he prepares for likely another start in a Detroit Lions uniform in his latest opportunity.

Driskel took first-team reps in practice this week, so he is likely to start on Sunday against the Dallas Cowboys. Stafford was held out of practice with fractured bones in his back.

So the Oviedo, Florida, native gets another shot to prove himself in the NFL.

College career of twists and turns

In 2012, Driskel put together the best season by a quarterback at the University of Florida since Tim Tebow up to that point. He threw for over 1,600 yards and 12 touchdowns as the Gators went 11-2.

But then he broke his ankle in the third game of the 2013 season. And then former Florida head coach Will Muschamp benched Driskel midway through the 2014 season.

It was best for both parties to move on, so Driskel moved west to Lousiana Tech for the opportunity to reset his football career.

He proceeded to have the best season of his college career, throwing for over 4,000 yards and 27 touchdowns. Driskel’s performance was enough to gain the attention of NFL scouts. He was selected in the sixth round of the 2016 NFL Draft by the San Francisco 49ers.

It took two years and another change in scenery for Driskel to finally see NFL action. He got his shot in Cincinnati last season when Andy Dalton went down with a season-ending injury in Week 12.

Across nine games and five starts, Driskel completed roughly 60 percent of his passes for over 1,000 yards, six touchdowns and two interceptions. He added 130 yards on the ground and two rushing touchdowns.

But the Bengals went 1-4 in those five starts and drafted quarterback Ryan Finley in the fourth round of the 2019 NFL Draft. After Driskel injured his hamstring, the Bengals placed him on injured reserve and waived him to make Finley the backup quarterback.

Driskel got another opportunity to be an NFL quarterback when Detroit scooped him up to be Matthew Stafford’s backup. However, the Lions ruled Stafford out for last week’s matchup with the Chicago Bears. Driskel was once again under center in an NFL game.

He proceeded to have his best game as a pro, completing 27 of his 46 passes for a career-high 267 yards. Though he did throw an interception, Driskel did have a touchdown pass and 37 rushing yards. The Lions still lost 20-13, but Driskel did his best to keep Detroit in the game.

Driskel and the 3-5-1 Lions will be looking to pull off the upset when they face the Cowboys on Sunday afternoon.