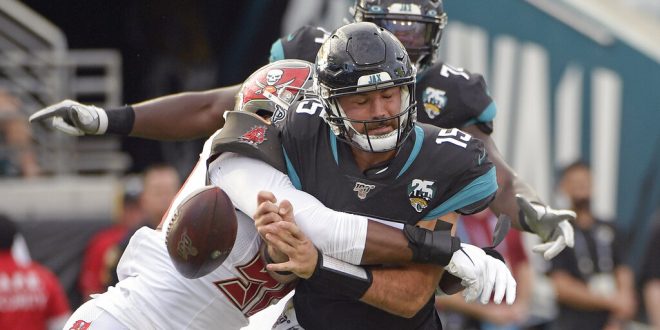 The Tampa Bay Buccaneers walked into TIAA Bank Field in Jacksonville and left with a win yesterday.

Despite starting quarterback Gardner Minshew in the second half, the Jags couldn’t muster enough magic to overcome the 22 points the Buccs scored on early turnovers, ultimately falling 28-11.

Starting in the 2nd half. pic.twitter.com/0KkboYUpIq

Buccaneers quarterback Jameis Winston didn’t throw a touchdown (he was 21 for 33, throwing for 268 yards).  However, the team scored four touchdowns.

The Buccaneer defense gave them control of the game early. Tampa Bay linebacker Devin White picked off Jaguars quarterback Nick Foles at the beginning of the game,  Shaquil Barrett stripped the ball from Foles and White recovered and returned it 14 yards for a touchdown, and Carl Nassib notched a strip sack of his own which Ndamukong Suh recovered. They held Foles to 7 for 14 and 93 yards.

When Minshew replaced Foles to start the second half, he did a bit better. He threw for a touchdown and 147 yards on 16 of 27 attempts. But the spark wouldn’t be enough, as Sean Murphy-Bunting sealed the game for the Bucs with an interception in the end zone that popped out of the hands of Dede Westbrook.

"I preached every drive we need to set a standard and show the league who we are as a defense. I feel like we did that. We gave up some things, but we didn't let down. We defended every blade of grass."

The Tampa Bay run game carried the team the rest of the way, with Peyton Barber rushing for two touchdowns and 44 yards, on 17 carries.

Tips of the Cap

Head Coach Bruce Arians was proud of the way his defense played:

"Overall really pleased with the effort and finally getting two in a row."

Winston joined his coach in the sentiment, attributing solid defensive and run play as the root of winning football games:

Looking Back and Looking Ahead

Sunday marked the first time the Buccaneers (5-7) won two games in a row during the regular season. They’ll look to continue the streak against the Colts this Sunday. The Jaguars, who haven’t won a game since they beat the Jets in October, will look to snap their four-game loosing streak with a win against the Chargers this Sunday.