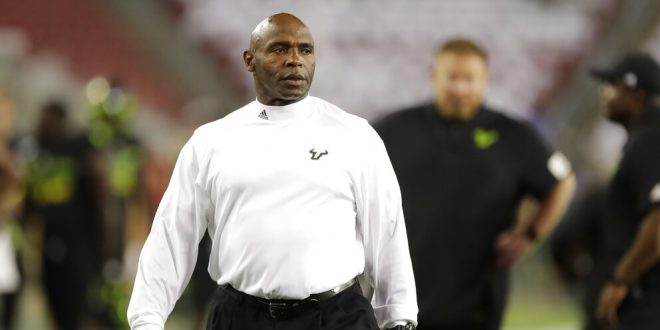 FILE - In this Nov. 7, 2019 file photo South Florida head coach Charlie Strong looks onto the field during the first half of an NCAA college football game against Temple in Tampa, Fla. South Florida has fired Strong as coach after three seasons. Athletic director Michael Kelly announced the move Sunday, Dec. 1, 2019 two days after the Bulls concluded a 4-8 season with a 34-7 loss at UCF. (AP Photo/Chris O'Meara, file)

After his third season with the Bulls, Charlie Strong has been relieved of his head coaching duties at the University of South Florida.

Announced on Sunday afternoon, University of South Florida Vice President of Athletics Michael Kelly informed Strong of the University’s decision to move in a different direction. The University  has launched a national search to pursue new leadership for the Bulls.

“I would like to thank Coach Strong and his staff for their hard work and contributions to our program,” Kelly said in a press conference announcing the decision. “I have tremendous respect for Coach Strong and his dedication to recruiting and developing young men of talent and character and leading them with integrity. He has represented USF with dignity and class and we wish Coach and his family the very best.”

Not a Strong Tenure

The season for Strong and his team ended poorly, concluding the season with a four game losing streak. The Bulls lost to in-state rival UCF on Friday 34-7. Strong was only the fourth ever head football coach in the history  of the program.  USF just wrapped up its 23rd season of college football in 2019.  Charlie Strong took over the head coaching position at USF in 2016 from now former Florida State head coach Willie Taggart.

We are now in the heat of the 2020 Tokyo Olympics, and it’s baseball’s turn …