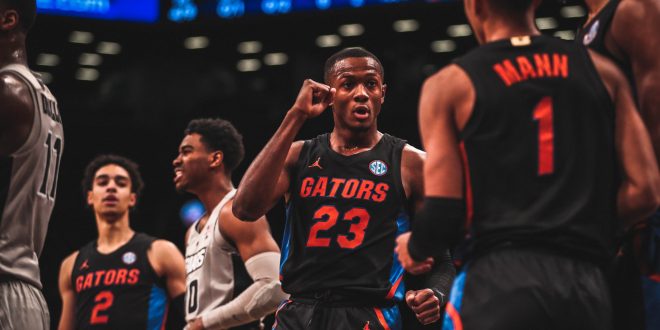 Scottie Lewis (23) celebrates with his teammate Tre Mann (1) against Providence on Dec. 17, 2019. (Credit @GatorsMBK on Twitter)

The Florida men’s basketball team bounced back in a big way after a loss to Butler by beating Providence 83-51 Tuesday night in New York.  This was the second game of the inaugural Air Force Reserve Basketball Hall of Fame Invitational.

With a margin of victory of 32 points, this is Florida’s biggest blowout win of the season. Florida never trailed during the entire game.  The 83 points are the most scored by the Gators this season as well as Florida has now won five of their last six contests.

Florida’s Keyontae Johnson led the way for the Gators with 19 points and 10 rebounds in an efficient performance.

Providence’s Alpha Diallo led all scorers with 20 points and 12 rebounds. This continues his recent stretch of double-double performances.

We out, BKLYN. #GoodNight pic.twitter.com/iNoma50IRL

One of the keys to the Gators’ success in Brooklyn came from their perimeter defense. The Friars could not buy a bucket if they wanted to.  Providence shot just 1 of 18 (5.6%) from three-point range. Providence averaged around eight 3’s per game coming into their match up against Florida.

The Gator backcourt held Providence’s hottest shooter, David Duke, to only two points on 0 of 5 shooting. Heading into Tuesday’s match up, Duke had shot a blistering 53% from three-point range.

Conversely, in this game, Florida’s shooters showed up in a big way. Coming into this game, the Gators were shooting an abysmal 29.1% from three-point range. Against Providence, Florida shot 44% (8-18) from three.

A key contributor to the improvement from range has been Noah Locke. Against the Friars, Locke shot 3 of 4 from beyond the arc and has been steadily improving all season. Since struggling to shoot at the start of the season, Locke has now shot 18 of 42 (42.9%) over the last seven games.

Florida’s guard play off of the bench played a pivotal part in their blowout win. Tre Mann, who has looked to regain his confidence after a concussion against UConn, scored 13 points in 26 minutes off of the bench.

Ques Glover continued to be a change-of-pace for coach Mike White’s rotations. He scored 10 points in tandem with Mann to spark the bench players. Of Florida’s 83 points, bench players scored 30.

The Gators travel to the Orange Bowl Classic against the Utah State Aggies on Saturday, December 21.  Utah State sits at 10-2 as of December 18.

Steven Walker is a beat writer for ESPN Gainesville and is currently studying Journalism & Sports Media at the University of Florida.
@swalker_7
Previous Gators Defeat Mercer 71-50
Next Florida Falters in 65-62 Loss to Utah State