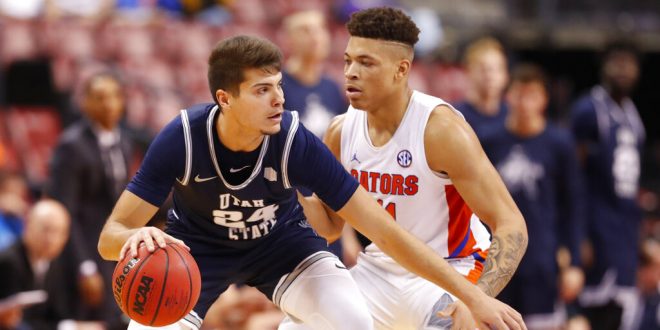 After another slow offensive start, the Florida Gator men’s basketball team was defeated by the Utah State Aggies 65-62 in the Orange Bowl Basketball Classic.

The Gators came out shooting but couldn’t get anything to fall. They started 0-14 from the field and made their first field goal nine minutes into the game.

Even with the slow start, the game was tied at 27 going into the half. A lot of that can be attributed to Kerry Blackshear Jr.’s inside presence. He finished the game with 22 points and 14 rebounds going 15-17 from the free throw line.

Blackshear, Keyontae Johnson and Noah Locke shot a combined 9-39 from the field. Despite the poor shooting performance, the Gators were in position to come away with the win.

Not the outcome any of us wanted.

Florida’s defense kept them in the game for most of it. They forced 16 turnovers and out rebounded Utah State by eight. This was also because the Aggies’ big man Neemias Queta went out of the game early with an injury. Also, Sam Merrill shot 5-10 from deep for Utah State and finished with a team-high 21 points.

As the Gators started to find their offensive stride, it went away at the end of the game. Florida scored just seven points in the final six minutes.

This team has come a long way from their preseason ranking and not in a good way. It seems like game after game it’s the same thing — slow offensive start, they begin to hit their rhythm and the team goes cold to finish the game.

Still, it’s important to remember that this team and season are still young. The Gators have just one more non-conference game before SEC play starts in January. That comes when they take on Long Beach State at home a week from today.

Mike White has shown in the past that it usually takes some time for his teams to get in the zone. Although, he has never had a team with this much talent. Once conference play begins, this team will have the opportunity to right its wrongs and it will be interesting to see if they take advantage of that.