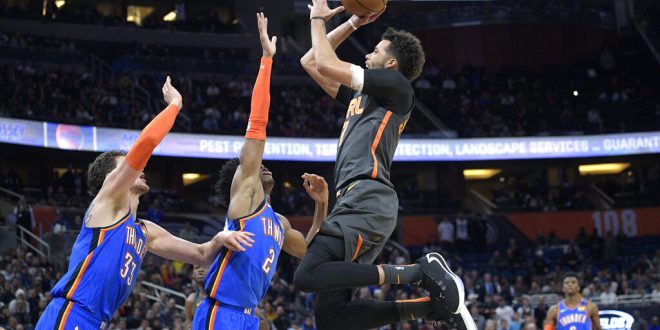 They looked for some payback on home court. They didn’t get it.

The Orlando Magic made a game out of their matchup against the Oklahoma City Thunder, but fell short in the 120-114 loss. They had the lead once the whole game. It last for one minute and 11 seconds early in the first quarter. Nerlens Noel’s dunk put the Thunder up 7-6, and they never relinquished the lead again. The Magic would pull within one point of the Thunder seven times and tied it up again once; but the Thunder pulled away again every time.

But the game had it’s upsides.

Coming into the game Terrance Ross averaged 13.7 points a game this season and 10.7 points a game for his career. Against the Thunder, he scored 26 off the bench. The Magic’s twitter account could not get enough of Ross’ performance.

Meanwhile, Nikola Vucevic put on a more familiar show. Last time the Magic faced the Thunder, the 2019 all star only scored 10 points. This time, he continued his success since returning from an ankle injury by scoring 24 points for the Magic. The Twitter game showed a little respect for Vecivic as well.

Since returning from the aforementioned ankle injury, Vucevic has averaged 20.4 points a game. Before the injury, he averaged 15.4 (and it’s down to 14.2 if you remove his 30 point performance against the Washington Wizards). This this game point improvement has helped the Magic’s struggling offense in an effort to stay with it in the Eastern Conference.

Where the Magic Trick Were Exposed

While the Magic’s offense showed some life, the defense had an off night. The Magic first in the NBA in scoring defense giving up, on average, just 104.4 points a game. A closer to average performance would have given the team the win. However, if the offense starts to have nights like tonight (the Magic are currently second worst in the NBA in scoring averaging 104 points a game), the Magic may start to see themselves climb higher in the standings.

The Magic will have a chance to do so against the Boston Celtics at home on Jan. 24.

Harrison is a sports coordinator at ESPN 98.1 FM/850 AM WRUF. He served as a beat writer for Florida Gators football for the 2019 and 2020 seasons. He also contributes to WRUF's Gainesville Sports Center segments and makes appearances on the Clash on Harp on Sports. Harrison has been a content writer for WRUF since January 2019 as well.
@HarrisonSmaj
Previous Jaguars hire new offensive coordinator Jay Gruden
Next Heat remain unbeaten in overtime; top Wizards 134-129