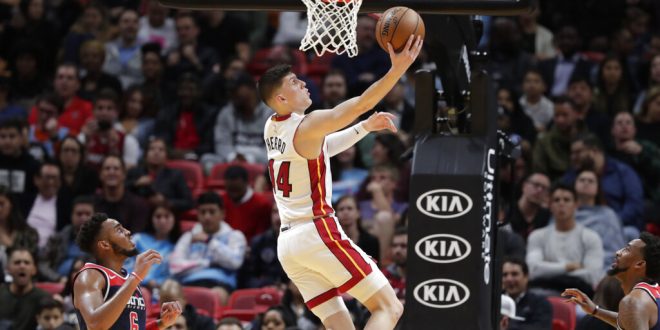 With 35.7 seconds left in the fourth quarter, James Johnson buried a clutch three from the left corner to knot the game at 118 and send the game to overtime. Familiar territory for the Miami Heat.

The Heat finished off the Washington Wizards in overtime, winning 134-129 and moving to 31-13 on the season. Miami is undefeated in overtime this season in eight tries. This is their second consecutive overtime win after beating the Sacramento Kings on Monday night.

Washington trailed by 19 at halftime but stormed back to take the lead with 5:14 left in the third quarter. The Heat re-established their lead quickly, but eventually gave it up again with two minutes remaining in the fourth quarter. Johnson’s three-pointer gave the heat the opportunity to win the game in overtime.

Tyler Herro came off the bench for the Heat and still managed to lead the team with 25 points. The first-year man out of Duke notched seven threes on the night, which set a Miami Heat franchise record for rookies.

Herro came up clutch for Miami. He scored 13 of his 25 points in the fourth quarter and OT.

The performance from the Heat bench proved to be essential, with 74 of Miami’s 134 points coming from its reserves. Herro shined, Goran Dragic added 22 points and Johnson played the hero in the fourth quarter with his game-tying trey.

Former Florida Gator Bradley Beal provided the majority of Washington’s offense against the Heat. He led the team in scoring with 38 points. Beal scored seven of his team’s 11 points in overtime to keep the Wizards in the game, but could not overcome the Heat.

The Wizards (14-29) travel to Cleveland tonight to face the Cavaliers (12-32). Washington has lost its last five road games.

Miami hosts the Los Angeles Clippers (31-14) on Friday night. This is the first time that these two powerhouses of their respective conferences will meet this season.