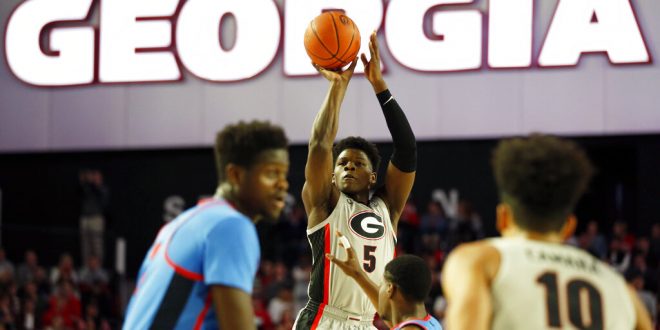 The Georgia Bulldogs and Missouri Tigers are looking to get back on track in Columbia, Missouri on Monday night.

With both teams sitting in the bottom-tier of the SEC, if either squad wants to make a potential postseason run, a win tonight would be huge.

The Tigers and Bulldogs have grappled with the SEC-portion of the schedule to this point. Both are sitting at 1-5 in the conference.

The Tigers are 7-3 at home this season, while Georgia is just 1-4 in true road games.

The Georgia Bulldogs (11-8, 1-5 SEC) have one of the most electrifying players in college basketball. Future NBA Lottery pick, Anthony Edwards hasn’t disappointed for UGA. He has scored over 20 points in eight games this season and is currently averaging 18.6 points per game.

After Edwards, other standouts include forward Rayshaun Hammonds (13.4 points per game and 8.1 rebounds per game).

The Bulldogs have the firepower to beat an under matched Missouri team, talent-wise, but UGA has certainly underachieved.

Currently, Georgia has lost three games in a row, all by double-digits. Not only is the team losing, but it hasn’t even been competitive.

At this portion of the schedule, the Bulldogs have a chance to make a run. Five of their next six games are against other SEC squads (Missouri, Texas A&M, Alabama and South Carolina) that sit near the bottom of the conference.

Missouri (9-10, 1-5 SEC) has had issues putting the ball in the basket so far this season. Outside of a 91-point explosion against Florida on Jan. 11, the Tigers have shot under 35 percent in each of the last four games, including a 28-percent performance against West Virginia.

If the Tigers are going to get things going on the offensive side of the ball, they’ll look to a pair of Smith’s to do so.

Dru Smith and Mark Smith both average a little over 11 points per game, and lead the team in that category.

A great way Mizzou usually manufactures points is through forcing turnovers and making free throws. The team is second in the SEC in steals with 141 this season. On the free-throw line, the Tigers have the best free-throw percentage in the conference at 77.4 percent (267 of 345).