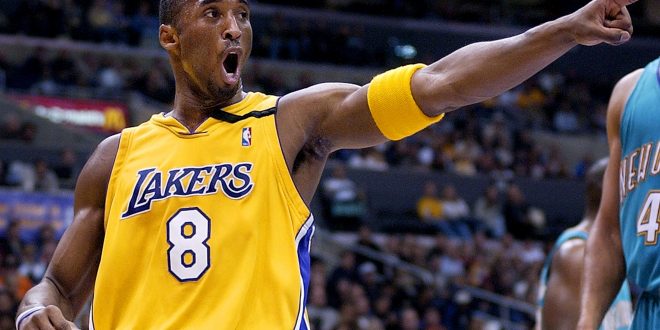 FILE - In this Dec. 13, 2002 file photo Los Angeles Lakers' Kobe Bryant points to a teammate during an NBA basketball game in Los Angeles. Bryant, the 18-time NBA All-Star who won five championships and became one of the greatest basketball players of his generation during a 20-year career with the Los Angeles Lakers, died in a helicopter crash Sunday, Jan. 26, 2020. He was 41. (AP Photo/Mark J. Terrill, file)

NBA legend Kobe Bryant died in a helicopter crash Sunday. Bryant, 41, and his 13-year-old daughter Gigi were among the nine passengers that died in the accident. The helicopter crashed during foggy conditions into the hills of Calabasas, California.

Kobe Bryant spent his 20-year NBA career with the Los Angeles Lakers and won five championships. In addition, he won two Olympic gold medals with the US National Team,

made the All-NBA team 18 times and achieved the Finals MVP twice to name a few of his accomplishments. Perhaps his greatest achievement was the immeasurable impact he made on the NBA and the game of basketball.

Bryant’s Widespread Impact On The NBA

After the news broke of the Bryant deaths on Sunday afternoon, the NBA community responded with an outpour of emotion.

Carmelo Anthony’s Portland Trail Blazers were among the teams that played in the aftermath of Bryant’s death. Anthony created a special bond with Bryant during their time playing for Team USA in 2008 and 2012. Anthony spoke to reporters after Sunday’s game with his emotions bearing. “Our friendship and relationship was deeper than basketball. It was family. It was friendship. Basketball was the last piece of connective tissue between us two.”

Lakers player Lebron James passed Bryant for the number three spot on the NBA’s all-time scoring list on Saturday one day before Bryant’s death. During his Saturday game against the 76ers, Lebron wrote “Mamba 2 Life” and “8/24 KB” in marker on his sneakers. James and Bryant also competed together on Team USA.

Los Angeles Clippers and former NBA player Doc Rivers struggled to find words following the news of Bryant’s death. Rivers faced Bryant as an opposing coach in two NBA Finals when he served as head coach for the Celtics.

Trae Young fought back tears as he spoke about the last conversation he had with Kobe.

He said Kobe told him he was proud of how much he's seen his game progress, and to continue to be a role model for kids growing up and for Gigi. pic.twitter.com/fhus29cdN5

NBA Commissioner Adam Silver issued a statement confirming the deaths and his devastation. Silver said, “For 20 seasons, Kobe showed us what is possible when remarkable talent blends with an absolute devotion to winning. He was one of the most extraordinary players in the history of our game with accomplishments that are legendary.”

Former Lakers player Magic Johnson reflected on his time with Bryant and the respect he developed for him. Within a twitter post Johnson wrote, “My friend, a legend, husband, father, son, brother, Oscar winner and greatest Laker of all-time is gone. It’s hard to accept. Kobe was a leader of our game, a mentor to both male and female players.”

Kobe’s Legacy Will Live On Through The Impacts He Made

Lastly, perhaps the most devastating factor of Sunday’s accident was the additional loss of Kobe’s daughter Gigi Bryant. Kobe’s love for basketball was instilled into Gigi and she soon established her own legacy at the young age of 13. On the morning of the accident, it is reported that the Gigi and her father were traveling to her tournament at Mamba Sports Academy.

Stories of Bryant’s impact will continue to pour out in significant numbers as the reality of his death develops among his friends, family and those who he inspired. Kobe Bryant’s  impact seems to have stretched across every team, division, rival and opponent and has affected an entire generation of athletes, and his legacy will continue to inspire athletes for generations to come. Rest in peace Kobe and Gigi Bryant.

Parker Welch is a Senior at the University of Florida majoring in Sports Media at the College of Journalism & Communications.
@parkerrwelch
Previous Santa Fe men’s basketball rebounds with a win at home against PHS Academy 96-83
Next UGA faces Mizzou in matchup between struggling teams